This page is about the Worm added by Actually Additions. For other uses, see Worm.

The Worm is an item added by Actually Additions. Right-clicking it will place it in the world. 1-2 Worms can be obtained by tilling Dirt with a Hoe at a 5% chance. Breaking the block the Worm is on will remove it permanently—it will not drop itself. When on Dirt or Grass, it will automatically till and hydrate the 3x3 area it is in. It will also cause the crops planted around it to grow slightly faster. 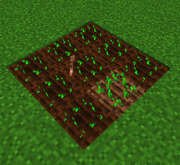 A Worm tilling crops around it.

If the Worm is named "snail mail", the Worm will use a snail texture. This change is purely aesthetic.

A worm re-textured as a snail.