Can you please create articles for the machines from the mods you work on linked on the template list? -- SatanicSantaContribs•Administrator and Editor 14:17, 7 October 2014 (BST)

Hey, I'm having another texture issue linking steam machines to electric ones, this time in the High Pressure Forge Hammer page. It looks like it doesen't use the non existing GT machine texture, but the IC2 forge hammer tool, which is strange, since the GT machine is actually called "Forge Hammer", and not "Forge Hammer (GregTech)" or something like this. Can you fix it, please? --Gigas2897 (talk) 21:08, 7 October 2014 (BST)

Well, already tried that, and the result is that the target page is "Forge Hammer (GregTech)", which does not exist... Maybe you can create a redirection page to solve this problem? I've seen this solution in several other pages, actually. --Gigas2897 (talk) 21:18, 7 October 2014 (BST)

Pretty sure you can put |link=Forge Hammer to get around that. Although I'll have to move the GT Forge Hammer page since IC2's Forge Hammer uses the same name, so it being Forge Hammer (GregTech) should actually be ok ;) Chocohead Nag• Edits• Staff 21:27, 7 October 2014 (BST)

Oh, now I got it. I once asked Retep for the translation of the navbox and he told me that the first part is for the icon that has to be shown and the second is for the link. Everything here works like this, right? --Gigas2897 (talk) 17:25, 8 October 2014 (BST)

Thanks for assisting in fixing the links. However I was wondering if you could explain something in regards to your latest change:

|3= is just a better way to use the third parameter in the NI template, so you don't need to have all 3 parameters (tilesheet name = 1, preferred link = 2, output name = 3). When in doubt read the documentation for that template. -- SatanicSantaContribs•Administrator and Editor 14:36, 9 October 2014 (BST)

Could you please vote on the Wolfman staff nomination on the noticeboard? Thanks. -- SatanicSantaContribs•Administrator and Editor 18:19, 2 November 2014 (GMT)

Thanks for making the edit for the Thermionic Fabricator recipe. I am kind of confused how the http://ftb.gamepedia.com/Feed_The_Beast_wiki:All_templates works. Whenever I try to use one I fail. Any tips or so? --Darklord987 (talk) 18:31, 26 November 2014 (UTC)

Well, the kinda key ideas are, you use {{G|Item name}} to get normal items in a crafting grid, and put |mod=V for example to make sure that it uses the vanilla item. The list of all the prefixes is here: Module:Mods/list. If you do use |mod though, remember to use {{Gc|mod=V|Item Name}} instead of {{G|mod=V|Item Name}} so that the wiki knows you only want that item, and not any ore dictionary items that count as the same as that item. Tanks are a little harder, but generally it's just {{T|liquid name|liquid amount}} and it should all work.

IMO, the best way to understand it is to go onto pages and look how it is done, and essentially just copy the way it's done there.
Chocohead Nag• Edits• Staff 18:50, 26 November 2014 (UTC)

If you look at the recipes using circuits in the IC2 assets you will notice that they all use the oredict version so please use {{O|circuitBasic}} and {{O|circuitAdvanced}} for circuits in all IC2 recipes. Thanks. 🐇Retep998🐇🐰Bunny Overlord🐰 21:06, 3 December 2014 (UTC)

When you edit pages that are not yet patrolled, could you please patrol them? It'd make my life a lot easier :P. I'm asking LuminousLizard the same thing. -- SatanicSantaFTB Wiki Admin 01:05, 8 December 2014 (UTC)

you should make it add a new line to the tooltip saying what the fluid is in gray or something. -- SatanicSantaFTB Wiki Admin 23:20, 17 December 2014 (UTC)

I came here to request some disambiguation pages.

I have more requests :P sorry about that.

...and as a result, we are giving you a very heavy hammer. You must only give 3 month bans, and do not disable account creation. This is a sort of new thing to us, and the reason is the Curse global user database thing. -- SatanicSantaFTB Wiki Admin 03:00, 8 February 2015 (UTC)

Hurray, although I've yet to see anyone else actually translate to British English ;) Chocohead Nag• Edits• Staff 18:26, 1 April 2015 (UTC)

The great wiki gods have told me to assign you to document NedoComputers. This doesn't mean you have to, but it does mean if anyone asks you should say you're working on it :P

Actually, it might be a different mod. My knowledge of the Aztec language is fairly limited.

Oh, and Cblair might be messing around with your sandbox. Don't worry about it (that's what this message is really for).

NedoComputers seems pretty abandoned, and the newer ProjectRed versions seem to not be able to allow computers to read the cables, but if you (/they) really want me to...

You could probably ditch NedoComputers :P OpenComputers is better anyway. Besides, the ancient gods don't know enough English to tell the different from NedoComputers and another mod that starts with an 'N', or a letter that looks like 'N' such as 'M', 'N', 'V', 'Z', 'K' and any other letter with those confusing little lines in em'. (Blue Power? Or is that too many curves?) -Xbony2 (talk) 21:36, 21 June 2015 (UTC)

It may not be a good idea to put down every Chisel material type in the infobox. I'd recommend doing what I did on Tough Rod and the navbox - just putting down Manyullyn (or maybe we could consider wood, since it looks more 'normal'). Anyway, it is a bit cluttery already, however, but with TiC's recent additions plus ExtraTic the infobox would be overloaded (my NEI screen for FTB Infinity takes up an entire page of TIC chisels). -Xbony2 (talk) 17:59, 16 July 2015 (UTC)

Rubbish. Even if there is new stuff, it'd be months if not years before Retep uploaded the new tilesheet. Just look how many he has waiting already. I prefer putting them all there that could be there rather than lying and putting 1 ugly one instead. Chocohead Nag• Edits• Staff 19:30, 16 July 2015 (UTC)

Feed The Beast Wiki:Tilesheet update guide - you requested the page simply because you can't be bothered doing the backlog you've got. Or because someone wanted a guide. It involves you being lazy either way. Chocohead Nag• Edits• Staff 20:05, 26 July 2015 (UTC)

That is in fact exactly what happened; I was fed up with it not getting done, asked him to tell me how to do it, and he told me to write that guide page with what he told me. -PaladinAHOne Staff (talk) 22:49, 26 July 2015 (UTC)

Please be sure to follow the identical sequential edits rule when performing mass edits. Thanks. -- SatanicSantaFTB Wiki Admin 18:33, 26 October 2015 (UTC)

I have no idea. When I saved the page it took ages to load and when it finally did I don't think my edit had actually saved, but checking the Recent Changes seemed to imply that it did. I never checked the diff of it though. Chocohead Nag• Edits• Staff 20:10, 3 November 2015 (UTC)

Neither do I :| Ah well, was only commenting that we suddenly had a general wiki Github issues page rather than just the tilesheet/ore dictionary extension ones. Chocohead Nag• Edits• Staff 20:23, 3 November 2015 (UTC)

Oh thank god it's not either me being crazy or some terrible mobile bug. -- SatanicSantaFTB Wiki Admin 00:20, 4 November 2015 (UTC)

The reason I had the cement input animated was to remove all recipes being in the format of "Orange Cement + Orange Dye = Orange Cement" (or green + green, etc), but rather have it mimic the ore dictionary's animation. In game the recipe lets you use any color for the input, and just outputs color based on the dye (basic like the ore dict, except without actually using a ore dict name). If there is some reason I shouldn't use animation there, it would be nice to know, as I would just want plain white for the input then. (or maybe some way to shuffle the inputs automatically) –KnightMiner t/c 04:39, 6 November 2015 (UTC)

Well then each of the 8 concrete icons should be different as it animates to get the point across that you can mix them, as right now it just looks broken with them all being the same and animated. Chocohead Nag• Edits• Staff 07:52, 6 November 2015 (UTC)

The oredict has a shuffling feature, which unfortunately doesn't work correctly. I'll see if I can get it fixed somehow. 🐇Retep998🐇🐰Bunny Overlord🐰 15:08, 6 November 2015 (UTC)

I'm pointing this at you because you are/were cleaning up that mod and probably know more about it then me :P

Hey Choco, whatsupp, look, I've tried a lot to make it work but it seems there's a problem that I can't understand because I'm dumb with this stuff, so I guess you're the one to solve it. The thing is that the freaking template:Bee_DPL2 won't do the job of retrieving the icons from the tilesheets, therefore leaving the lists with no pictures of the bees, it's not a big deal and my experimentation leaved it with no pictures at all (instead of big grey boxes that came from "Gc" (Now they're P)), do you have any idea what could be causing it? The DPL on Template:Comb It's kind of an a***ole and won't tell me anything useful :( Frenchiveruti (talk) 05:23, 13 November 2016 (UTC)

Frenchiveruti- It's because of a bug/flaw in DPL. I reported it to Curse. 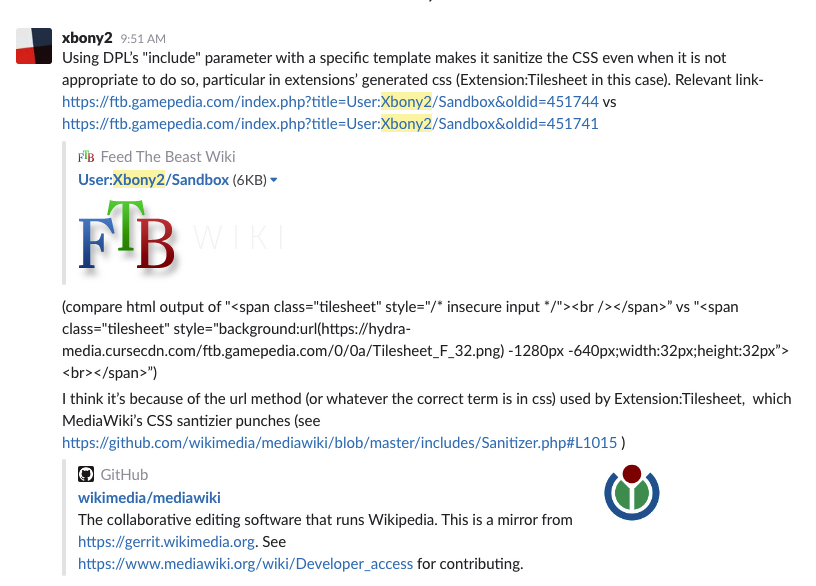 Perfect, I was asking because the template Bee DPL2 at first used Gc in order to display the images, and that was causing the grey empty boxes everywhere. Frenchiveruti (talk) 16:28, 13 November 2016 (UTC)

I'm trying to upload the pictures for the charging things for IC2, but I can't figure out how. There is no section for IC2 in the Tilesheet request page, so if you could help me that would be great. LordofEditing =(Talk)= 20:26, 23 January 2017 (UTC)