Here is a link to the entire results dumped. Some info:

What Minecraft version(s) do you usually play on? 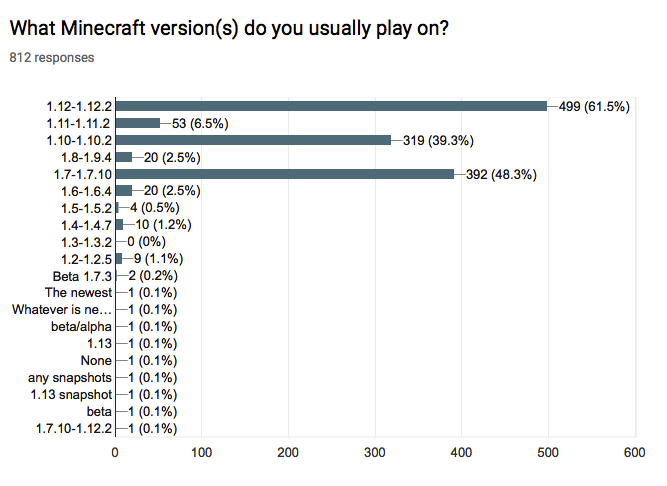 What Minecraft version(s) should the editors of the FTB Wiki focus on? 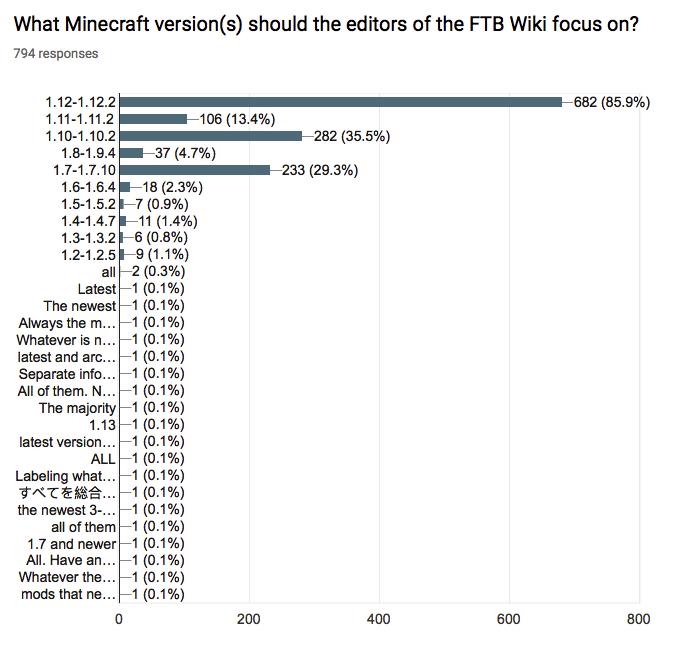 What particular mod(s) should the editors of the FTB Wiki take attention to/document?

What modpack launchers/mod managers do you use regularly? 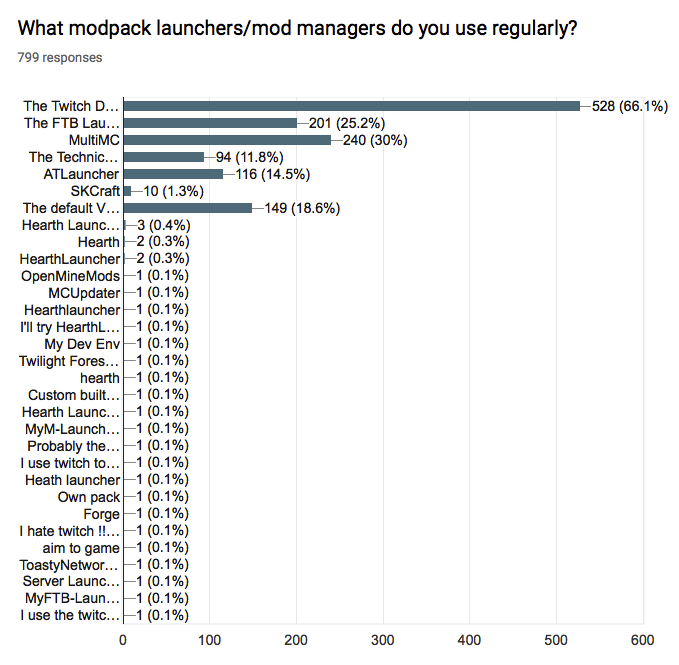 What language(s) are you proficient in?

So, the actual image is messed up here thanks to an excess of custom responses. But here are the results anyway (everything above 0.5%):

If you speak a language other than English (if you don't, skip this question), how interested are you in documentation translated to your language? 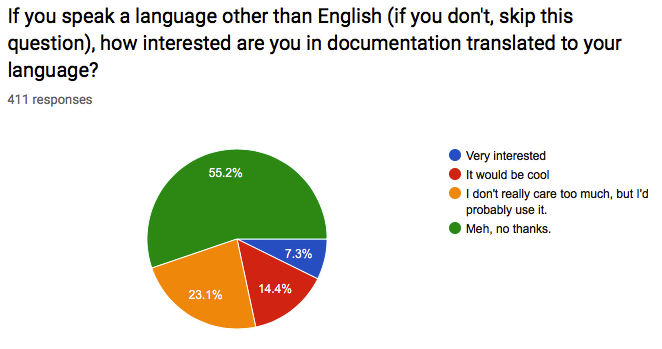 How often do you contribute to the FTB Wiki?

If you don't contribute very much, why not?

Image messed up here too. Results are:

What platform do you usually use when viewing the FTB Wiki?

What platforms should the FTB Wiki improve accessibility to? 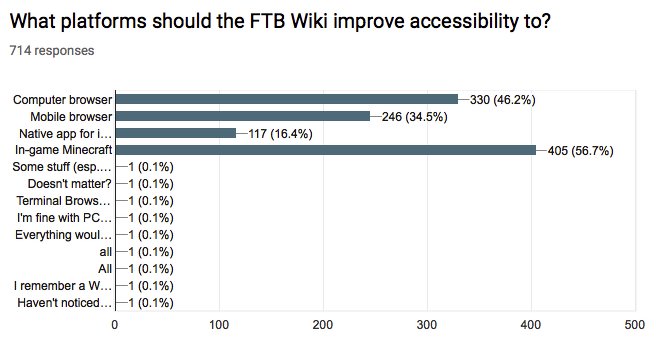 In-game Minecraft was especially popular, and more popular than last year. I would suspect people who regularly visit the wiki (all responders from last survey) don't mind online documentation as much as Redditors would. If you are a mod author interested in collaborating feel free to poke us. It would be a big but cool project to work on.

What web browser(s) do you usually use to browse the FTB Wiki? 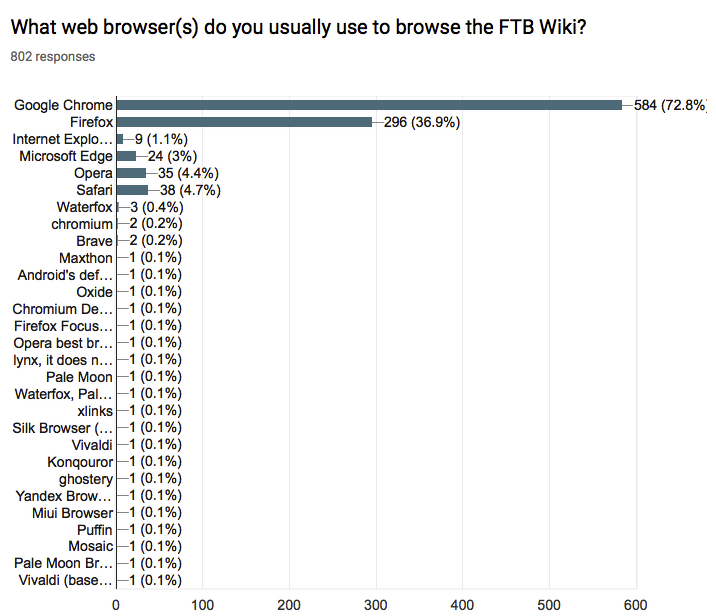 Google Chrome won by a lot (73%) with FireFox next (37%). Plenty of nerd browsers that nobody uses. Last survey it was mostly the same.

When using the wiki, which skin do you regularly use? (you can change the skin in your preferences, under appearance) 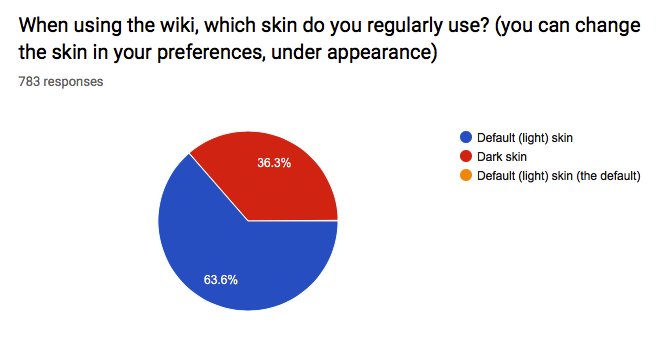 Do you have any final suggestions or words for the Official FTB Wiki?

Obviously there were many responses. Many thanks; I didn't really mention them in Discord since there were a lot of them and they were repetitive (which is cool). Plenty about versioning, which is something we need to discuss at some point. I'm not going to reply to them all here. I've shared the more interesting ones in Discord over the course of the survey, but I will (or other editors can) put out specific responses and respond to those suggestions.

A "current bugs" or "known incompatibility" sections to mod items/blocks would be nice.

As an unwritten policy we don't really document bugs, except on final versions. It's better to just report them to the mod author and have them fix it. -Xbony2 (talk) 01:49, 7 January 2018 (UTC)

Accessibility to the FTB Wiki from In-game Minecraft sounds very interesting and I can imagine it would be incredibly convenient.

Mob pages should have the spawn conditions, it would be considered an incomplete page if there was no information on that. -Xbony2 (talk) 01:49, 7 January 2018 (UTC)

I half-way feel that this was aimed at FTB and not us. If so, can't help with that. But if you mean we should document non-FTB modpacks, well, we do and people are welcome to document their modpacks here. Examples include All the Mods 3 and Hexxit. In theory we focus on FTB but in reality we mostly focus on mods over modpacks, though. -Xbony2 (talk) 01:49, 7 January 2018 (UTC)

bony is a butt/Bony is cool

Finding version-specific information is probably the biggest issue with the wiki. I don't think having a page (or different website) for each version would be generally practical for us. I have an idea that I've played with a lot in my head that I want to try out and discuss, and in theory it would be fairly easy for editors to use and extremely user-friendly. -Xbony2 (talk) 01:49, 7 January 2018 (UTC)

Can you add a list of machines/items to a mods info page? I love browsing on the go or at work looking at the machine chain I need.

Kind of like the Russian Minecraft Wiki? Well, I'm against this kind of set up for two reasons. One is that it takes a lot of time for an editor to do. Another is that it's slow; until it was collapsed, RU.MCW had a GregTech article that had a load time of like 30 seconds (literally). This kind of information is best covered in a getting started guide (which we're lacking for many mods, but still). -Xbony2 (talk) 01:49, 7 January 2018 (UTC)

Despite having to work with a game as complex and messy as modded minecraft, you folks have managed to keep its wiki looking really clean and professional. Keep up the good work. :p

In future surveys, when asking people what minecraft version they play, also give the options ""whatever the newest version of minecraft is"" and ""whatever the modpacks I play support"". I only marked 1.10.12 because that's what Skyfactory and Beyond support, but wouldn't play an older version otherwise."

Okay so, in theory we should have an article for each modpack with a mod list. Some are missing and some are incomplete but yes.
I agree that the current main page sucks. Going kind of beyond the question but it needs improvement. Because of DPL being broken, it's capped out at 500 mods. That probably should be fixed, but I'm actually more in favor of removing the mod list altogether. We've documented so many mods and that's only going to grow more and more. It already takes up an absurd amount of the main page at 500; if had 1000 it would be completely useless. We should instead link to a page dedicated to listing the mods (List of mods) and have that page be well organized via ABC order.
But uh, back to modpacks. I don't really like the way the unofficial wiki does it. It's too exclusive for an open wiki. I'd argue most of the people coming here are looking for information for the mods rather than information for the modpacks so I wouldn't want to prioritize those.
The earlier option I will be noting. Playing an older version for a particular modpack counts as playing on that version. I don't see why it wouldn't. -Xbony2 (talk) 01:49, 7 January 2018 (UTC)

have an option to filter by mod pack so only relevant data comes up (example: knowing the best y level to mine copper is not going to help me in skyfactory)

We don't really have that much modpack information in general (besides from articles for them). But I don't feel the need to filter out ore spawning mechanics because it's not relevant for a modpacks; obviously if the information isn't applicable for you, you can just skim over it. -Xbony2 (talk) 01:49, 7 January 2018 (UTC)

Have users dedicate theirselves to making pages on mods if such mod has much content.

I expect this might be challenging, but finding articles that are out of date is very challenging. I rarely search Wiki as I assume what I will find is out of date. Mods change recipes or mechanics and I don't see how this is captured. 1.7.10 mods and 1.12 mods may be very different. Reading an entry based on the wrong mod or minecraft version creates more confusion than it should.

I'd suggest tagging each article with version the article is relevant to rather than last version. I would also suggest trying to capture articles for a version, and making them obvious (colour coding at least major versions over some critical threshold)

I agree. Documenting stuff across versions has been the biggest accessibility problem the wiki has currently. Don't know about color-coding (seems weird and would be bad for color blind folk) but I appreciate the suggestion. It's something we need to discuss. -Xbony2 (talk) 01:49, 7 January 2018 (UTC)

I get that the bit about having information on multiple versions of mc mods would be tough, but, having that legacy information available would be awesome. There are tons of people still on 1.7.10, and I myself am bouncing between 1.7.10, 1.10.2, and 1.12.2. Knowing what mechanics are exclusive to which version would be great.

I hate gregtech, its too vast and I don't wanna go edit this.' -Freebles

I like how receptive it is to the community (it has its own Discord). The main wiki that I edit, Minecraft Gamepedia, has a "community" but they're not really a close one, everyone mostly just does their own thing.

I like it when I find wiki pages with no unfinished pages, I'd prefer mods pages to be completely filled before moving on to another.

Easier said than done. People lose interest in mods, and people lose interest in wiki editing, and often before they are done with documenting a mod. And of course, we editors often aren't interested in finishing off other people's tasks; we have our own mods to finish off! So yeah, sorry. Having more editors would be great in this though if you're interested~ -Xbony2 (talk) 01:49, 7 January 2018 (UTC)

I think it's just Gamepedia that causes it, but regardless, it often seizes while banners are loading and then crashes Chrome/Safari for iOS 8 (yes, I could update, but... muh jailbreak... and yes, I've tested this on non-jailbroken devices.)

I think the main problem is just a lack of content, especially for recent mods and modpacks.

Interesting thought. But, a lot of documentation for me is self-discovery (figuring out things and then documenting them) so I would have to disagree. Plenty of people can learn from just messing around the mod, or looking at the source code, or looking at other sources of information (in-game manuals, videos, etc). I'd rather have information here than ancient Reddit threads though, since those aren't quite as user friendly. -Xbony2 (talk) 01:49, 7 January 2018 (UTC)

I would prefer that the dark skin be made default.

Eh, no, since less people seem to use it despite being informed of its existence, and because I'd be really annoyed if someone accused of copying the unofficial wiki (because everyone knows they invented the dark theme). The current skin is suppose to look like the FTB websites. But mainly I don't dark themes (although other editors disagree) -Xbony2 (talk) 01:49, 7 January 2018 (UTC)

I'd suggest breaking up the mod list on the front page by Minecraft version, or alternately, the list of modpacks. As it is, those lists are essentially unreadable, being one huge clump of links.

I'm really impressed with all the work that has gone into this wiki, and hope to see it further expanded in the future. Thank you

A few changes for next survey

Thanks for responding if you did respond. Shout out to me for writing all of this and going through every response (which was a lot of work but I think it is still worth it. If you came from Reddit or Discord and don't know how to add a comment to this page, this page gives information on that (just put it under the horizontal line/the four -s). Like I said I'll be going through some of final suggestions later and responding to them. -Xbony2 (talk) 01:49, 7 January 2018 (UTC)

I think it's worth mentioning that because the survey, and all things pointing to the survey, were written in English on English-default websites, the questions about language usage are obviously going to be skewed to a populace which speaks English. We basically have no way of knowing how many users want to use the wiki but can't because they speak no English. -- SatanicSanta🎅FTB Wiki Admin 21:22, 8 January 2018 (UTC)