This page is about the Turntable added by Better With Mods. For other uses, see Turntable.

The Turntable is a functional block added by Better With Mods. It is most commonly used for block rotation, Redstone timing, and spinning unfired pottery. 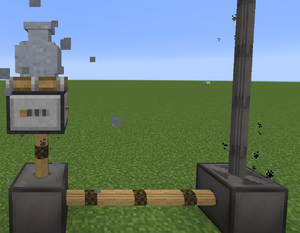 A mechanically powered Turntable rotating an Unfired Vase set to a speed of 0.5 seconds.

If the Turntable is not turning unfired pottery and is mechanically powered, it will play the vanilla button click sound at every rotation.

If a Clay block, Unfired Crucible, Unfired Planter, or Unfired Vase is placed above the Turntable, it will slowly work into different unfired pottery blocks. The Unfired Urn, which is at the end of the pottery cycle, will turn into a piece of Clay. Each block takes around 8 seconds to turn into the next, and with each process, the sound of Clay breaking is played.

These unfired blocks will then generally be fired in the Kiln. 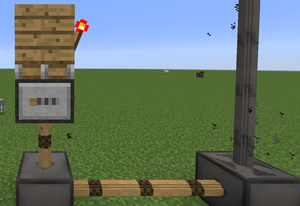 A mechanically powered Turntable rotating a block with a Redstone Torch on it set to a speed of 0.5 seconds.

Certain blocks (generally Redstone related) that are attached to the sides of blocks above the Turntable will rotate with the block it is on. These blocks include: Torches, Redstone Torches, Levers, Signs, and Buttons. This allows for the player to create different timed circuits using the redstone signal on the Redstone Torch. This method is commonly used for timing a Bellows which is essential for the creation of Stoked Fires.