The Thermal Evaporation Plant is a multiblock structure added by Mekanism. It is used in the Mekanism Ore-Processing system to produce Brine from Water (see Usage) .

The basic structure is available in two versions which are shown in the following images. The differences between the simple and the advanced version are the temperature and production rate; the simple version saves on resources but is less productive. The Thermal Evaporation Controller and Thermal Evaporation Valve have no predefined positions and can be set anywhere in the structure above the base layer.

The minimum height of the structure is 3 blocks. To increase the internal storage and rate of evaporation, the structure can be raised up to 18 blocks high. 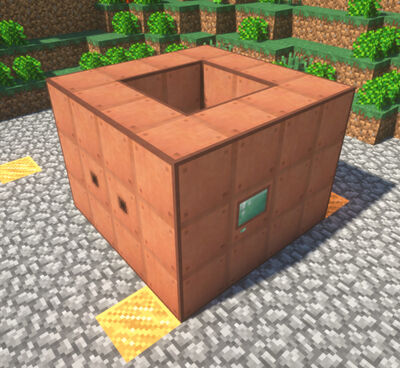 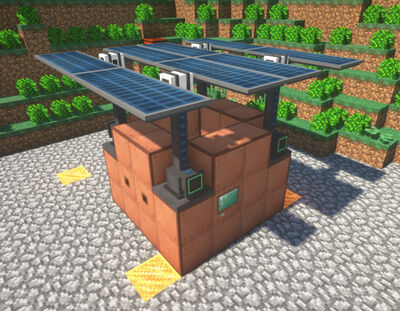 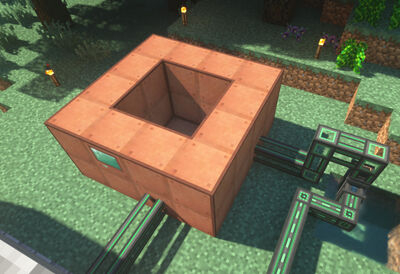 A Thermal Evaporation Plant with connected pump for water supply (right side). The produced brine is extracted via the left pipe.

The advanced version works independently from the ambient temperature, and achieves much higher temperatures and production rates thanks to the energy of the solar modules. Either version, however, may have heat imported to the structure via Thermodynamic Conductors connected to the Thermal Evaporation Valves. The power from the solar modules of the advanced version is still available when they form part of the structure. If the power from the four solar modules is used in a resistive heater, the heat generated is more than enough to reach the maximum possible evaporation rate (of 1080mB/t) if imported to the structure.

The structure requires no further external energy source. To start the production of Brine, input Water into the Plant via Basic Mechanical Pipes and Electric Pumps.

The produced Brine can be extracted via Basic Mechanical Pipes and the second Thermal Evaporation Valve. To start the extraction the connection between valve and pipe must be configured with a Configurator.