This page is about the launcher and group of modpacks. For the original modpack, see Technic SSP.

Technic is a launcher, community and large group of modpacks created by the Technic Team. Technic was originally created as a small, personal modpack by KakerMix on a website named Something Awful. It only had a few downloads until it was reviewed by a member of The Yogscast, where it was placed into the spotlight of their many fans. The Technic Launcher was created to automatically install of the Technic modpacks, including over 10,000 third-party modpacks[1].

Although Technic was once hegemonic in the modded community, the Technic Team has not released one of their own modpacks in years, nor have they modified their launcher beyond basic maintenance. As such, Technic is no longer a large part of the modded community. However, the Technic modpacks and launcher still have a cult following within its own community, and Technic still has a large legacy, paving the way for future modpacks and modpack distribution platforms.

Technic originated as a small modpack named Technic released in Beta 1.7 by KakerMix on Something Awful. It only had a few downloads until it was reviewed by a member of The Yogscast where it was brought to the forefront of their fans. With his newfound popularity, KakerMix assembled a team to create the Technic Launcher and further modpacks.

Technic released one of their most popular modpacks for 1.2.5, named Tekkit. It functioned for both clients and servers, and included support for Bukkit. Tekkit revolutionized the world of modded Minecraft with its large but well-fitting and very compatible selection of mods.

Tekkit Lite was released for 1.4.7 as a remastering of Tekkit. Voltz was released for the same version, and later upgraded to 1.5.2 and 1.6.4. It highlighted a group of mods based around the Universal Electricity API. Big Dig was released for 1.5.2 as a kitchensink modpack with easy progression to allow for the ease of experimentation and building.

Avoiding the industrial theme of many of their earlier modpacks, Technic released Hexxit for 1.5.2. Hexxit heavily encouraged adventure, similar to Technic's older modpacks Hack Slash Mine and Yogbox. For 1.6.4, Tekkit was remastered once again as Tekkit, with a galactic theme using Galacticraft.

The original Tekkit modpack was remastered in Tekkit Legends, a 1.7.10 remake. Technic also partnered with the modpack authors of Test Pack Please Ignore and Blightfall to make their modpacks official Technic modpacks. They also worked with the YouTube duo known as the "B-Team"- Generikb and BdoubleO- to create the modpack Attack of the B-Team and raise money for charity.

The Technic Launcher has gone through several stages. The current version includes a page with featured modpacks and content, a page allowing for the download, playing and management of modpacks and a news page.

In the "Modpacks" page, modpacks can be searched, downloaded and played. Each modpack can include a description, a panel showing the latest updates, the number of likes, installs, and runs (although not for official packs) and a link to the modpack's Discord.

Third-party modpacks are not hosted by Technic itself. The launcher acts as a proxy, meaning some modpacks may go offline and unavailable for download.

The Technic website is located at https://www.technicpack.net/. The Technic Launcher can be downloaded there, and all of the modpacks Technic has available can be browsed. They can be sorted by official status, popularity, trending, recently updated or new modpacks. The website also includes news about Technic and links to Technic's forums, as well as other points of interest. 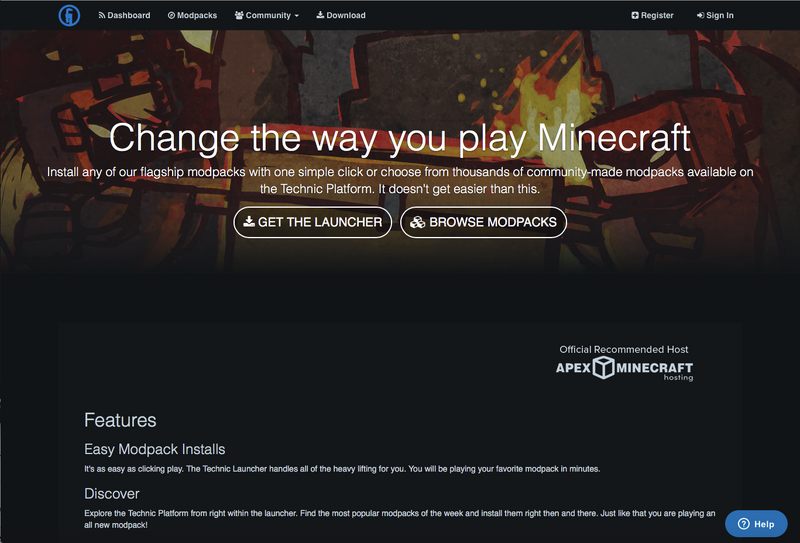 Technic Scraps is a program by Technic designed to highlight high-quality unofficial Technic modpacks. The Technic Team eventually plans to cease development of official modpacks in favor of modpacks created by the community[2]. The modpacks are selected by a group of "curators" that go through a large amount of modpacks to search for modpacks that they think deserve the attention. Currently, there is only one "Volume", which features GT New Horizons, Modern Harmony and LoTRCircles.

The Technic Scraps logo featured on the website and launcher.

That functionality was removed in GregTech 4 and future versions, however.