The Stoneling is a passive mob added by Quark.

Stonelings spawn rarely in dark caves deep underground. The item they hold will have a random rotation, similar to Item Frame rotation. They only need a 1x1x1 area to spawn in but they need a block light of 5 or less to spawn. They require space in the hostile mob cap to spawn, meaning for best spawn rates, there should be no other hostile mobs to spawn. They will always spawn carrying an item that they will drop when killed.

Using a Heart of Diamond on stone will create a tamed stoneling despite light level and hostile mob cap fill level. 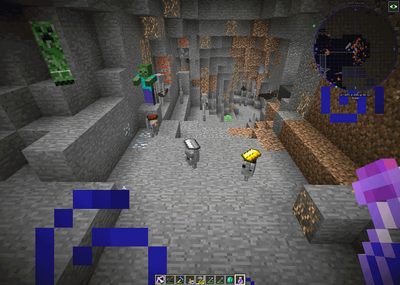 Stonelings will always drop the item they are holding and have a 20% chance to drop a Heart of Diamond. Looting enhances that chance with a multiplier of 0.033. Looting does not effect any other drops.

Additionally, Stonelings have a small chance of dropping a Heart of Diamond which may be used on a any stone block to create a tame Stoneling, or may be used in the crafting of the Pickarang.

No experience is rewarded when killing one.

All stonelings are immune to fall damage, projectile damage, and cactus and can breathe underwater. They cannot be pushed by water streams.

When shot with an arrow, the arrow will simply bounce off of the stoneling without causing it damage.

Stonelings are nervous, flighty creatures. If a player approaches too closely without sneaking with an empty hand, they will startle, run away and vanish. When the stoneling vanishes nothing will drop. It is possible to reach and kill a stoneling without sneaking if you are fast enough,

Using a Heart of Diamond on stone will create a tamed stoneling. You can give them items by shift+right clicking with the item and they will hold them for you. Using the same action when it's already holding something will swap items with what you are holding. An empty hand will take what it is holding from it. They can hold up to a full stack of an item.

Holding stone and right clicking the stoneling, the will eat it and change texture to complement the texture of stone it was last fed.

You can feed them the following stone types. 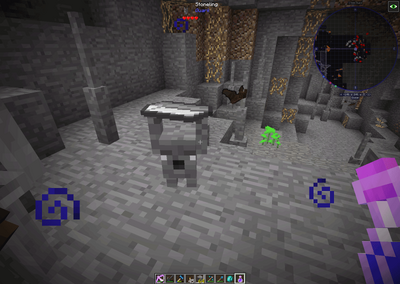