Feed The Beast Wiki
Register
Don't have an account?
Sign In
Advertisement
in: Advanced Generators, Steam, Energy production,
and 2 more

The Steam Turbine Controller is a machine added by Advanced Generators. It is used to build the Steam Turbine Generator multiblock, which generates Redstone Flux (or other types of power depending on the blocks used) from Steam. 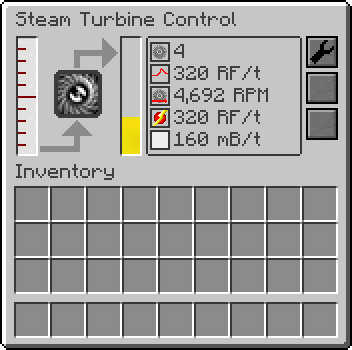 The Steam Turbine has a spinning speed, measured in RPM. Every tick the Turbine consumes Steam to spin faster until it reaches its maximum speed of 5000 RPM and then to maintain that speed. Once Steam is depleted it will slowly slow down until it stops. As long as it is spinning the Turbine will also produce Redstone Flux depending proportionally on how fast it is spinning, with the maximum production at maximum speed. Power is produced regardless of if Steam is being consumed to maintain the speed.

Maximum RF production is equal to the sum of the RF production of all Turbine blocks in the structure. This gives a minimum of 100 RF/t with 1 Iron Turbine, and a maximum of 25 000 RF/t with 50 Enderium, Vibrant Alloy, Manyullyn or Advanced Alloy Turbines.

Steam is consumed at a rate of 5 mB/RF and is calculated using the maximum RF production. This means that a Turbine spinning at 2500 RPM consumes as much Steam per tick as one spinning at the maximum 5000 RPM but only produces half as much RF/t.

The rate at which a Turbine can spin up or down depends on the "maxSpeedDelta", given in RPM. Each tick the turbine loses 20% of that amount in speed, increased to 95% when producing power, but gains that much speed as long as it consuming Steam. This means that a Turbine supplied with enough Steam and producing power gains 5% of that amount of RPM every tick. It is given by the following formula:

The component blocks can be arranged in any configuration the player wishes as long as the blocks are adjacent to other components of the multiblock structure.