This page is about the State Cell from Project Red. For other uses, see State Cell. 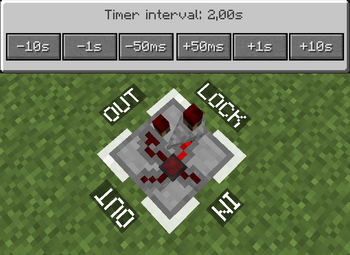 A State Cell from "Project Red" with input, output and lock sides indicated by WAILA and the GUI

For an easier usage, NEI and WAILA could be installed, which show the input, output and lock on the State Cell.

The State Cell has one input, two output and one lock side (shown in the picture) for red alloy cables, redstone, an adjacent circuit, machine, lamp or anything that can be controlled with redstone signals.

If a redstone signal receives the gate on the input side, then the signal is forwarded to the first output on the left side of the input (where is the start of pointer).

With a right-click on the gate, you can set the time for the signal transmission on the first output from 0.2 seconds till about 7200 seconds (2 hours), with an accuracy of 50 milliseconds (0.05 seconds), in 50 milliseconds, 1 second and 10 second steps.

If a redstone signal reaches the State Cell on the lock side, the pointer is blocked. An, at the input, incoming signal is then further forwarded to the first output but even if the signal is terminated at the input, the transmission at the first output remains active until the lock is released and the pointer can move and reach the second output.

Using the screwdriver from Project Red, the orientation of the gate can be changed freely in all four directions, and with holding the crouch key you can change the (first-)output/lock side.