The Snow Queen is a Twilight Forest boss added in the 1.7.10 update. She is currently the final boss in the progression and has 250 (

× 125) health points. She spawns at the top of one of the towers in the Aurora Palace. The tower she inhabits has iced over rooms.

During the battle she drifts up and down on an ice cloud. The ice cloud acts as a shield for her, preventing players from damaging her from below.

She has two battle phases. In her first phase, she summons Ice Crystals. These mobs distract the player and allow her to regenerate her health. When her health drops to 125 (

× 62.5) health points, she will enter her second phase. In this phase, she extends her arms and shoots snow from her hands. She can also fly to the top of the chamber, then quickly fall to the ground, potentially crushing the player with her ice cloud.

When killed she can drop the Snow Queen Trophy, Tri-bow, and the Seeker Bow. 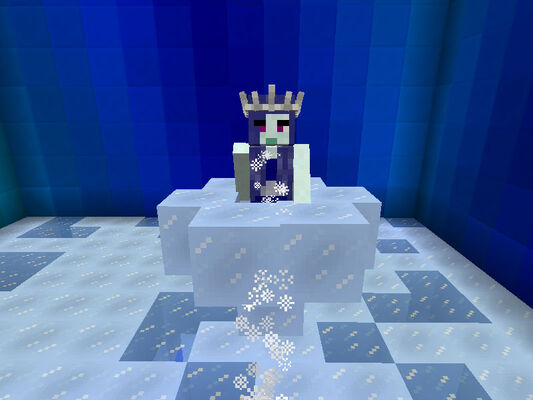