This information pertains to an older version of the mod. This item was removed in Project Red version v4.7.0pre6.

The Routed Extension pipe is a block added by Project Red. It allows, in conjunction with the Routed Crafting pipe and the Data Card, extremely complex production systems with other machines (see Usage). As of version v4.7.0pre6 it has been deprecated.

If the mod MineChem is installed, the Routed Extension Pipe can be decomposed with the Chemical Decomposer into different chemical compounds of MineChem. 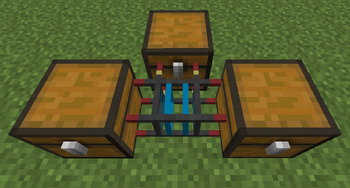 The picture shows a Routed Junction Pipe between three chests, but it is the same for the Routed Extension Pipe. Only one chest is is actively connected, which can be recognized by the yellow lines on the pipe.

The Routed Extension Pipe connects with all other pipes from Project Red as well as with Chests and machines. If more than one Chest or machine is adjacent to the pipe, only one of these Chests or machines will be connected to the pipe (show in the picture). The active connection can be switched by using a Screwdriver.