The Robot is an item added by BuildCraft which has no direct function, but is the basic component for all robots which perform later a specific job.

The robots from BuildCraft differ greatly in the way of handling to robots from other mods such as ComputerCraft. While ComputerCraft Turtles must have every single step programmed manually to tell the robot what it has to do, this is not the case with the BuildCraft robots. Every version of the robot has a specialized job, which is pre-programmed and cannot be changed. This attribute decreases the freedom to change the job of the robot, but increases the usability, as it doesn't require programming skills.

Some robots do not need any configuration; they can be placed in the world and just do their job. For example the Picker Robot needs only to be placed on the Docking Station to work. The picker flies in the active chunks around the player and picks up all items lying on the ground; everything until its inventory is full. Then the picker returns to the Docking Station and stops its work. This function works, but the player must tell the robot where the items are to be unloaded, and optionally where to look for around laying items (working zone) if they want to actually obtain the items. Setting a working zone is very helpful as it prevents the picker from stopping in the middle of work to return unneeded items. 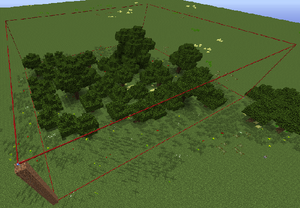 The picker may not need a defined work area to function, but for the Leaf Cutter Robot this option is nearly required. Unless one wants their entire forest to be pruned to the stump, leaving you with scenario similar to that time you naively tried clearing a single tree with a flint and steel, you're probably better off specifying where you DON'T want it to cut (read: anywhere outside your tree farm). This can be accomplished by setting a working area which is defined with Land Marks. An example of a 3-dimensional working area is shown in Picture 1. To program the robot to accept this working area, one must use a Location Map on the completed Land Marks and then added it to the gate by using "work in area" and then inserting the location map into the ? area. A Zone Planner can be used to set large areas quickly, and simply right clicking a single block with the map will set a single block work area. 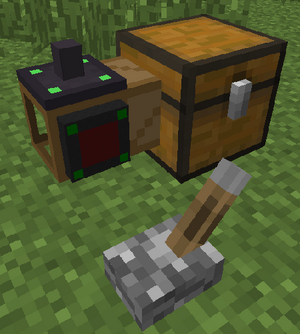 Picture 2: A simple control station for robots with a Wooden Transport Pipe, a Docking Station and a Emerald Gate.

The controlling of the robots is provided by the various gates, with Emerald Gates being the most versatile, and via a Docking Station, which is shown in the example in Picture 2. All designs of the Gates (Standard, Clock Timer, Redstone Fader, Light Sensor and Autarchic) have the same basic functions of the Gates to interact with pipes and the same options to interact with the Robots via the Docking Station.

Thus the fundamental principle of the BuildCraft Robots is: Every robot knows his job and is optimized for that, and the player must control, respectively set limits, for the job.

There are currently 17 robots in BuildCraft, which are briefly described in the following table. For detailed information and a setup example look in the respective article of the robot.

Note: None of the robots will actually pick up the items that they collect. This is the job of the picker.