The Redstone Module is an item added by SecurityCraft. It is a Module that can be inserted into other SecurityCraft blocks to change their behavior. The Redstone Module can be inserted into a Portable Radar to allow the Radar to emit a redstone signal when it detects an unauthorized player, into an Inventory Scanner to emit a redstone signal when a player has items that are contraband, and into a Security Camera, which allows the Camera to emit controllable redstone signals. 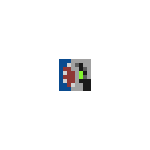