Redstone Flux (RF) is a form of energy that was originally implemented by Thermal Expansion 3, replacing the previously used Minecraft Joules and thereby removing the dependency on BuildCraft. RF acts as a highly simplified form of electricity that is designed to be easy to use and low on server impact.

Introduced in CoFH Core and later made available as a separate mod, RF was created as an API that allowed any mod to utilize it as its power system. Due to the large amount of mods that have since implemented it, RF created an era of cross-mod compatibility and mod interactions, enabling players to generate, transport, and consume power with machines and devices from many different mods simultaneously. Before RF, it was common that mods were self-contained and did not easily allow other mods to use their power systems.

In Minecraft versions 1.12 and later, many mods that originally depended on the Redstone Flux API now use the functionally equivalent Forge Energy (FE) system, which is included in Minecraft Forge and has largely replaced the RF API.

In-world, "Redstone Flux" is simply a name for the energy that travels through redstone. As a conductive material with magical traits, redstone dust can transport and even create small amounts of energy by itself. This energy travels through redstone in the form of a standing wave. While plain redstone dust loses energy fairly quickly, a dense mass of redstone is able to store and transport much larger amounts of energy than redstone dust as the energy wave is continuously reflected within the material for an indefinite amount of time, without any loss (given proper containment). Additionally, it becomes possible to convert other types of energy, such as kinetic or thermal energy, to Redstone Flux and back by using devices made from redstone and other materials. Thanks to these properties, Redstone Flux can be used as a replacement for electricity.

Unlike real electricity, the player does not need to complete a circuit to use RF. Energy is produced in generator machines and often transported with cables (and sometimes wirelessly). It can then be consumed by many different machines and items, or be stored for later use.

RF does not use a voltage mechanic per se, which sets it apart from IndustrialCraft 2's Energy Units, an energy system that was popular when Thermal Expansion 3 was released. Instead, machines, generators, and energy transporters are usually limited by the amount of RF they can accept, use, output, or transport per game tick.

Energy rates are described as Redstone Flux per tick, shortened to RF/t ("RF per tick"). For example, a basic Redstone Furnace from Thermal Expansion 5 will use 20 RF/t while running. As Minecraft normally runs at 20 game ticks per second, the machine will use 400 RF per second (RF/s). However, RF/s is rarely used to describe energy rates – RF/t is prevalent.[note 1]

Due to the magical properties of redstone, RF ignores the real-world law of conservation of energy and is not necessarily entropic. Therefore, energy may be created from nothing, transported and stored without any loss, or destroyed ("voided") without being released in another form.

Forge Energy is an addition to the Forge project introduced in Minecraft version 1.12. It offers an energy system functionally equivalent to RF. Many mods that previously depended on the Redstone Flux API now use FE instead.

Some newer mods rename their FE implementation to something more in line with the mod's theme. Examples of renamed Forge Energy implementations are:

Seamless conversion between RF and FE is easily possible. Often, it is even imperceptible - players may assume they are using RF while not noticing they are actually using FE. Additionally, as RF was the only well-known power system of its kind for a long time, it is now established as a household name in the modding community. For these reasons, the "RF" designation is commonly used as an umbrella term for RF and similar energy systems. 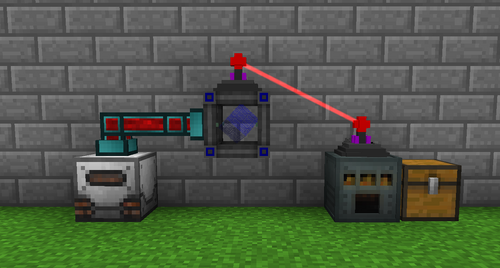 Example use of RF and FE, featuring 5 different mods: a Petrified Fuel Generator generates FE, which is carried via Resonant Fluxducts (converting to RF for transport and then back to FE) into an Elite Energy Cube. Energy Laser Relays transport it to an Alloy Smelter.

To effectively use RF/FE, the following is needed:

Although many mods add various options for each of these mechanics, some choose to omit parts of the chain. This is made possible by the extensive ecosystem surrounding RF/FE. For example, Environmental Tech adds different types of multiblock machines which consume or produce large amounts of RF/FE; however, it does not offer any transport or storage options, relying on other mods to provide this functionality.

Most mods that use RF/FE introduce different generators. The most simple among them will burn solid fuels like coal to produce RF/FE. More advanced generators may consume liquid fuels and/or require a coolant, others are able to use refined or unconventional fuels. Some generators even interact with their environment, like Thermoelectric Generators or the ubiquitous solar panel.

Providing enough fuel to feed generators (or setting up conditions that allow specialized generators to work continuously) is often an important part of gameplay. For example, generators which burn common fuels can easily be stocked with charcoal from an automated tree farm. The customizable nuclear fission reactor from the Big Reactors mod is more difficult to keep running, as the player needs to source sufficient amounts of Yellorium, often by means of an automated quarry or similar setups.

RF/FE is commonly transported through cable-like structures, like Thermal Dynamics' fluxducts or Ender IO's Energy Conduits. As there is no voltage mechanic, these are often limited only by their energy transfer rates. As players first begin to use RF/FE, they will usually craft cheap cables that allow them to transport RF/FE between their first generators and energy-consuming machines. With advancing technology and rising energy requirements, the player will eventually need to replace them with better cables as the cheap ones will prove to be unable to keep up.

Some mods offer more creative ways of transporting energy. Draconic Evolution, for example, adds Energy Crystals which transport energy wirelessly between each other, and additionally provides the ability to power machines without requiring a physical connection to the energy network.

By design, RF and FE are transported losslessly. However, it is possible for mods to introduce energy loss mechanics. The Energy Laser Relay, for example, loses 5% of the FE it carries by default.

Various ways of transporting energy over vast distances and even across dimensions exist. Examples include the Quantum Entangloporter and Dimensional Transceiver. One of the most popular options, though obsolete as of Thermal Expansion 5, is the Tesseract. Devices of this kind are typically able to transport items, fluids, and RF/FE simultaneously. They may incur an energy cost for some or all of these functions.

As previously mentioned, most forms of RF/FE energy transport support both RF and FE and will convert between them as needed.

While energy storage is not a strict requirement, it is often instrumental in providing continuous power supply. The player will find it useful to generate more power than they normally use and store any excess, so that additional machines can be used for a while even when power generation is insufficient to run everything at the same time.

Smaller batteries like the Basic Capacitor Bank, Basic Energy Cube, or Energy Cells are often available early on. They can typically be upgraded to store more energy and allow higher energy transfer rates.

Some mods feature more advanced energy storage solutions, often as multiblock structures. Ender IO's Capacitor Banks, for example, may be used alone, but can also be connected to free-form multiblock structures of any size and shape. Mekanism's Induction Matrix is a much more expensive structure, but can be built to store massive amounts of energy – even rivaling Draconic Evolution's Energy Core, one of the most well-known energy storage solutions. The Energy Core can be built in various sizes; the largest and most expensive variant can store near-infinite[note 2] amounts of energy.

Large energy storage enables the player to use more unconventional sources of power that create extremely large amounts of RF/FE, but only for a short time, like Lightning Rods.

In many cases, the efficiency of Redstone-sensitive power generators may be increased by turning them off while the player's energy storage is full, to ensure that no fuel is wasted. Some energy storage systems implement their own Redstone capabilities (a function that may need to be enabled by installing an special block or item), others add support for Redstone Comparators instead. The redstone signal is then used to control power generation. The player may improve this method with specialized devices like the Power Monitor, which allows turning generators off shortly before the storage is full, only turning it back on when the storage is close to empty. An advanced logic system like Integrated Dynamics or a computer mod like OpenComputers offer even more sophisticated power management.

Many different machines, ranging from simple furnaces to much more complex mechanisms like fully automated farms, are able to consume RF/FE. They generally use a set amount of energy for the execution of a specific job. Often, machines can be upgraded so that they will require less energy or work faster.

Items are able to use and be charged with RF/FE as well. Many mods add armor, tools, weapons, or Baubles that consume energy, often using power to replace the durability mechanic, or providing additional functionality when powered. Inventory batteries like the Flux Capacitor, which can use their own stored energy to charge the player's other RF/FE-powered items, exist as well.

While it is necessary to supply a machine with an adequate amount of RF/t or FE/t to have it work at full speed, it is customary that machines will still work with insufficient energy input. These machines will slow down their processing speed to meet available energy supply and even pause their work when out of energy, resuming when power supply is restored. However, some machines will not slow down, instead stopping their work entirely and resetting their current work progress; this forces the player to provide the full amount of energy that the machine needs at all times. To make continuous operation easier, RF/FE-consuming machines usually have an internal energy buffer to counterbalance fluctuating energy supply or consumption rates.

The vast majority of RF/FE-powered items, on the other hand, will simply stop working (or lose the additional functions they gain by being powered) if they do not have enough RF/FE stored to complete an action.

While converting energy to and from RF/FE is outside the scope of both projects, some mods add the possibility of converting their own power to RF/FE or vice-versa, and may even provide additional support for other power systems.