This guide was originally created by Lisimba; formatting was added by TheSatanicSanta.
This guide is under the Creative Commons Attribution-ShareAlike 4.0 International License
The original guide can be found on Lisimba's website.

This how-to tells you how to make a safe and fairly cheap pebble bed High Temperature Gas Reactor using the Minecraft mods RotaryCraft and ReactorCraft. The design is suitable for people who haven’t built a reactor before and who want to get started tinkering with nuclear energy. I’m focusing on the mods as they appear in the FTB Monster pack (v.1.1.1) as that’s the one I play, but the techniques presented here should work everywhere, possibly with some minor adjustments. This howto is about how to combine the blocks into a good reactor that’ll let you progress your base into the atomic age.

The reactor we’re building in this howto has these requirements:

If you want to get started, read on.

I’m using the FTB Monster pack version 1.1.1, based on Minecraft 1.6.4. It contains ReactorCraft and RotaryCraft version 19b. If you use a different version or another modpack, be aware that you may have different bugs or features.

Your base’s tech level should be high enough that you can produce several stacks of HSLA Steel. You must also be able to make TRISO fuel pellets.

The biome you build your reactor in actually matters, as they can vary in ambient temperature. Most biomes have an ambient temperature of 25ºC, and this how-to assumes you’re building your reactor in such a biome. If you check the temperature of an idle piece of reactor  and it shows as 25ºC, you’re fine. If it’s different you’re probably still fine, but it might just push you outside certain safety limits. Be cautious. 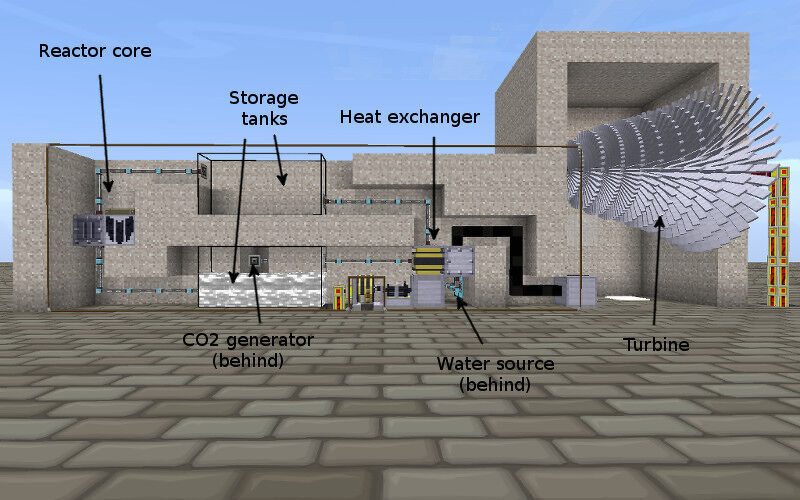 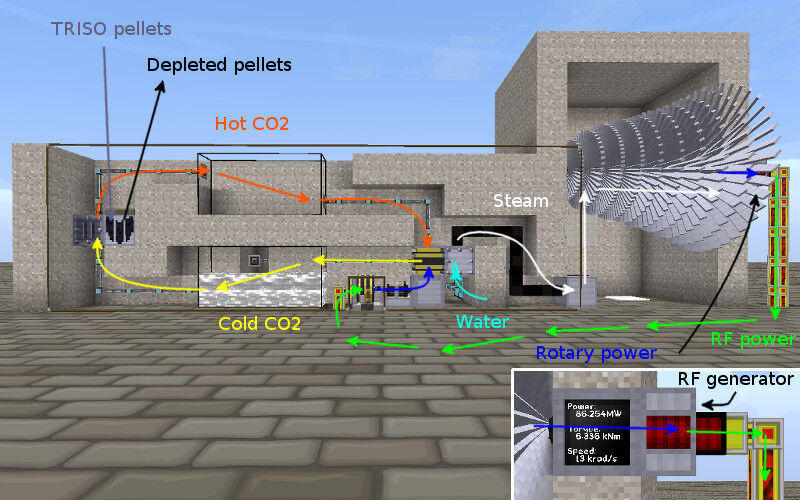 You can always extend a reactor by adding more parts. If you need more energy, just build another reactor module. If your heat exchanger can’t keep up, build a second one. Just make sure to hook it up properly, and use the performance numbers (this how-to is full of them) to make sure you’re upgrading whatever is your current bottleneck. You can match up the most important blocks like this:

Here are two examples (the designs are explained later): 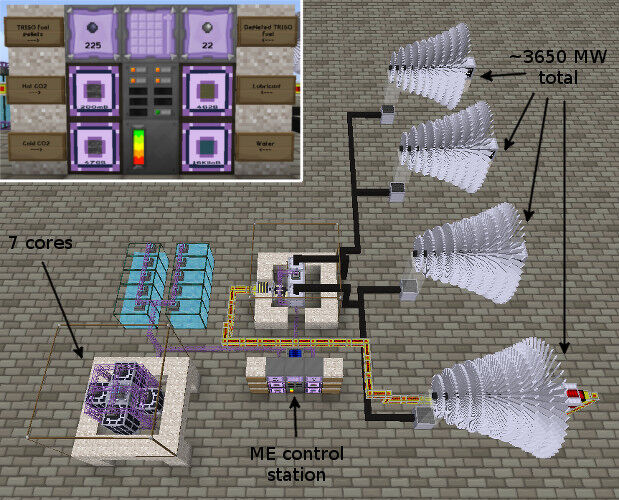 Things that don’t work - or, why do we need all these parts?

You might wonder why we don’t just put the steam boilers right next to the reactor core and skip the CO2 step. The reason is simple: the reactor core gets confused and refuses to heat up. I’m not sure if this is a bug, but it simply doesn’t work.

A CO2 heat exchanger but no CO2 loop

Besides, it feels like cheating. This setup isn’t how the reactor is supposed to work.

TL;DR: Use ReactorCraft steam lines for steam. Use Thermal Expansion Fluiducts for everything else unless you can afford Ender IO Fluid Conduits, then use those. Skip the rest of the plumbing section.

For this reactor you need to move hot CO2, cold CO2, water, and steam around. Steam can only be moved by ReactorCraft steam lines. As for the rest, if you want to stay with RotaryCraft you can use the liquid pipes and gas ducts it provides, but those are quite slow at moving things around. Their throughput and capacity is also not as easy to calculate as that of other pipe systems.

FTB Monster has at least a dozen different ways of moving liquids around. I haven’t fully evaluated them all, so I suggest you use whichever you like (or understand) best. That said, I’ll briefly discuss a few options here.
Note: if you build anything where the performance numbers I give here matter, you should verify them yourself. Like I said, I haven’t fully checked everything, and things may change from version to version, from modpack to modpack, and from server administrator to server administrator.
If you can’t figure out how to use some of these plumbing systems (which is quite possible as certain things are not very intuitive), find a how-to or mod spotlight. Explaining that in detail is beyond the scope of this how-to.

Liquid pipes and gas ducts are what you need if you stay with RotaryCraft. Water goes through liquid pipes and both types of CO2 go through gas ducts. They are fairly slow and tend to store a large amount of fluid before letting anything out at the other side, especially if the connections get long. 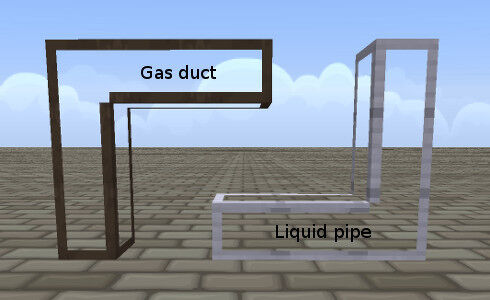 Every steam line block has its own internal steam “tank”, which can contain an infinite amount of steam. Every tick, a steam line will try to grab all steam from adjacent boilers, and then it will try to take steam from adjacent steam lines in order to reduce the difference in their steam amounts. Similarly, the other steam lines will try to take steam from this block (before or after, depending on how Minecraft has happened to schedule them).
If no steam is taken out of a network of steam lines, eventually they’ll all contain the same amount of steam (give or take a little, as they can’t divide one steam into parts). If steam goes in at some point and is taken out at some other point, the steam lines will end up with a pressure gradient and steam will move through them. 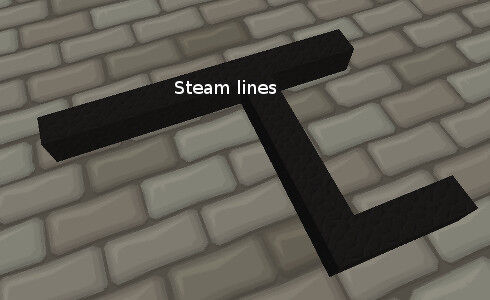 This mod provides you with Fluiducts. It doesn’t matter if you use regular or opaque versions, but presumably the opaque ones cause a little less lag.

Fluiduct networks will store 10 buckets of CO2, or 3 buckets of water, per fluiduct that connects to something else. It doesn’t matter how long your network is. Fluids are instantly available everywhere.
A fluiduct connection with a servo installed can extract 400 mB/t of CO2, or 120 mB/t of water, from a connected container. A fluiduct block can distribute this same amount per tick among its exit connections.
Usage hints: whack connections with a wrench until they look right. Install servos by right clicking a connection with a servo in your hand. Get to the configuration UI by right clicking a connection with an empty hand. The redstone control settings are in the red box hanging off the right side. You’ll usually want control status set to disabled, making it pump continuously. 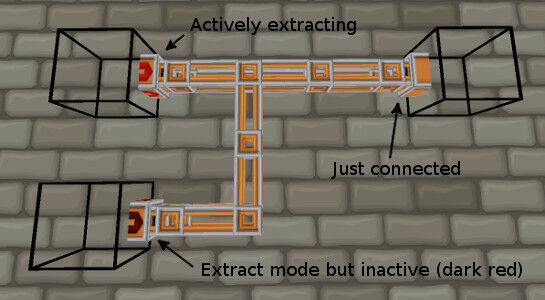 A fluid network can store one bucket per conduit, so longer networks can store more. Fluids appear to be available instantly everywhere.
A pressurized fluid conduit can extract 100 mB/t from an adjacent container. It can insert seemingly unlimited amounts into a container each tick, although it is of course limited by how much it can extract elsewhere.
Usage hints: whack everything with a yeta wrench until it looks right. Get to the configuration UI by right clicking conduit bundles, the big square things that touch the tanks you connect to. Usually you’ll want to set them to extract mode, with redstone mode always active. 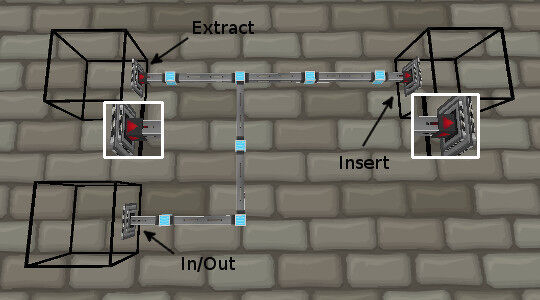 This mod, an addon to Applied Energistics, is probably the most high end option. You need an ME network with fluid infrastructure in it (a fluid disk somewhere, or perhaps a few big tanks with fluid buses).

The storage of the ME network is limited only by how much you want to spend on it. A 64K Fluid Storage Disk can store 16384 buckets (of up to 5 types of fluid). Fluids are available instantly everywhere.
A fluid import or export bus can transfer at one of three speeds (though it’ll always do a transfer once per second): 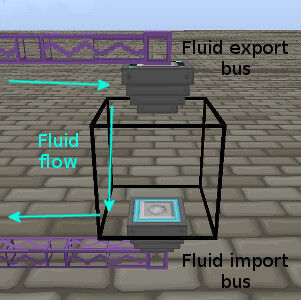 TL;DR: you can read just the TL;DR bits of the technical details but don’t skip the rest of this section. Which design you want to build depends on your resources and requirements, see #Which design to pick?.

There are many different designs for a reactor core , each with their own tradeoffs. They all have several things in common though. There’s at least one pebble bed reactor core block, and at least one carbon dioxide heat exchanger. Furthermore there’s plumbing to move CO2 through the heat exchangers, and some way to get pellets in and out the reactor cores. Finally, you need proper application of isolation in order to not waste heat. 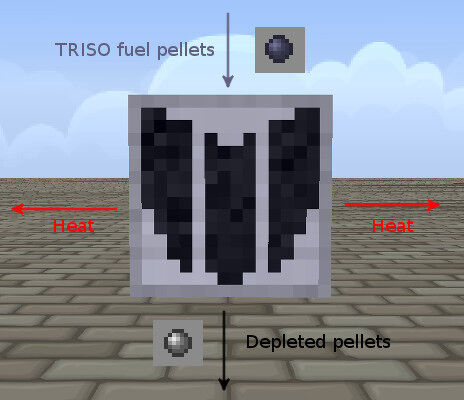 TL;DR: core should touch heat exchanger and no air blocks. You need to feed it new pellets occasionally.

Assuming it’s working, every tick there’s a 7% chance of a fission event, which will add 20 C (temperature) to the block. Furthermore, if a fission event happens, there’s a 3% chance that the lowermost pellet in the reactor’s inventory degrades by one step. Once a pellet has degraded 25 times, it becomes depleted TRISO fuel and is, basically, a waste product.

If you are short on materials or time, or want a minimal build for some other reason, it’s perfectly viable to just put the pellets in by hand or maybe by hopper. Your only consideration is to not break air isolation (see #Air isolation).

It’s true that there might be quite some variation from second to second, but the reactor has a considerable heat capacity so it’ll work out over a longer duration without immediately blowing things up if you ever get a (rare) second with a dozen or so fission ticks in it.

A reactor core block needs to be isolated from air, see #AIr isolation.

Not to be confused with the heat exchanger from Section 6. This one moves heat from the reactor core into CO2, the one from Section 6↓ moves it out of the CO2 and into water. 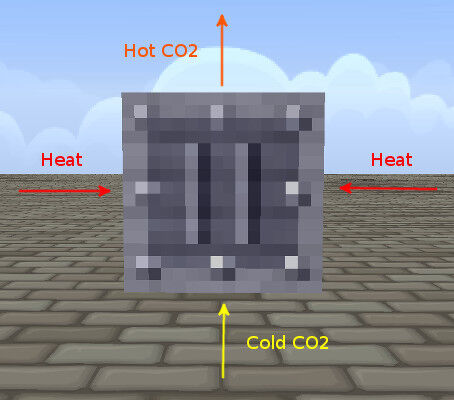 TL;DR: heat exchanger should touch cores but no air blocks. Up to four cores per heat exchanger is okay. Normal CO2 goes in the bottom, hot CO2 comes out the top.

From this you can see that at maximum capacity, the heat exchanger can handle 117ºC per second, needs 100mB of regular CO2 per second (and can thus run two minutes without being connected to a CO2 supply if starting from a full tank), and produces 100mB of hot CO2 per second. This also means that a single CO2 heat exchanger can handle the output of just over four pebble bed reactor cores, as those would produce 28ºC*4 = 112ºC each second.

Very similar to a pebble bed reactor core block, a CO2 heat exchanger distributes heat to many other ReactorCraft blocks, and needs to be isolated from air.

How to build a reactor core

I’ll show two reasonably good designs here, with some possible tweaks for each.

The first design (design A) uses passive cooling and can’t overheat if the cold CO2 supply stops. However, this comes with an efficiency penalty of about 16 to 52 percent, depending on the design specifics.
The second design (design B) runs at maximum efficiency but can overheat if the cold CO2 supply stops. There are several things you can do to reduce or even eliminate this risk though.

Which design to pick?

You decide. B1 is the cheapest, B4 is the best.

Two pebble bed reactor cores at full efficiency power approximately one turbine fully, but a turbine will work with less, it’ll just not run at full power. You need 50ºC/s to run a turbine, assuming no loss . B2 fully powers one turbine with a little left over, B4 powers two (again plus a little). A1 and A2 can’t fully power one. A3 can power one and (almost) a half.

Design A wastes some heat. Design B is 100% efficient.

Design A and B: the center

Both designs have a carbon dioxide heat exchanger at the center. The variations are in what touches the four horizontal faces of the heat exchanger, with the difference between A and B being the passive cooling system. 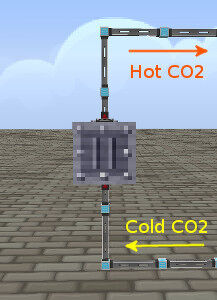