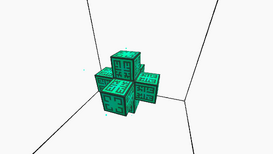 The structure needed to form the Quantum Quarry. 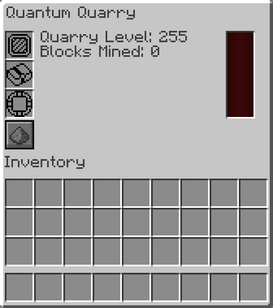 The GUI of the Quantum Quarry.

It outputs items automatically to inventories that are attached to it, like Chests. The Quantum Quarry's GUI can be accessed by right-clicking any of the Quantum Quarry Actuators. It has a internal buffer of 200,000 RF, and will instantaneously use 20,000RF to mine a single block in a vertically descending order. The interface has a slot for a Enchanted Book (that can be used as a upgrade, by an example, a Fortune III or a Silk Touch book), a slot for a Filter (ALL items that are NOT on the filter are destroyed), and it has, finally, a slot for a Biome Marker, which can be used to tell the Quantum Quarry what biome it should mine. For example, if it is set to mine Extreme Hills, it will find Emerald Ore, and so on. None of those slots need to be filled for the Quarry to function; however the book and the biome upgrades are generally recommended. The quarry may mine some of the surface blocks (flowers, saplings) depending on the biome. If biome marker is not set, the quarry will begin mining from x 0, z 0.

The quarry can also be controlled by a Redstone signal. The player may configure the redstone behavior on its GUI, right below the Biome Marker slot. On the interface, the player can also see which biome the Quantum Quarry is mining, the Y level it is at, and the amount of blocks it has already mined. This counter resets if the quarry block is broken.

Use of items and blocks that provide tick acceleration to blocks in their vicinity is not recommended, as the Quarry will explode if it detects any attempt to accelerate its operation.