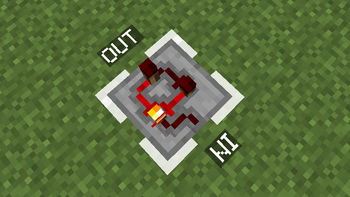 For an easier usage, NEI and WAILA could be installed, which show the input and output on the Pulse Former.

The Pulse Former has only one output side and one input side for red alloy cables, redstone, an adjacent circuit, machine, lamp or anything that can be controlled with redstone signals.

If a redstone signal reaches the Pulse Former on the input side, then one short pulse is transmitted to the output side. For more pulses must always terminate the old signal and re-enter a new signal to the input side.