From Feed The Beast Wiki
Jump to: navigation, search
This page contains changes which are not marked for translation.

The Pseudo-Inversion Sigil is an item added by Extra Utilities. It is used for creating Mobius "Unstable/Stable" Ingots, and cannot be used to remove enchantments from tools and weapons. It is obtained by doing the Stabilization Ritual with an activated Division Sigil. 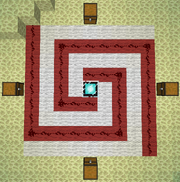 Shift-right clicking a Beacon with an activated Division Sigil will show the requirements and whether or not they have been met. The ritual must be performed in The End dimension. Trying to perform the ritual in The Overworld or The Nether will result in a message saying "Too much natural earth" (in The Overworld) or "Too hot" (in The Nether).

Once in The End, a spiral formation must be built with Redstone and String (with the Beacon at the center), and 4 Chests must be placed 4 blocks away in each cardinal direction from the Beacon (4 blocks north, 4 block east, etc.).

The Northern Chest (The Children of Fire)

The Southern Chest (The Gifts of Earth)

The Eastern Chest (The Descendants of Water)

The Western Chest (The Spices of Air)

Once everything has been set up, killing an Iron Golem on the Beacon will trigger "The Siege".

When the Siege starts, an explosion occurs and destroys the Beacon and chests, while all of the Endermen in The End will disappear. During the Siege, faster, aggressive mobs continuously spawn and the player must kill 100 of these mobs to end the Siege and complete the ritual. If the player dies or leaves the End dimension at any point during the Siege, the ritual will fail and the player will not be rewarded with a Pseudo-Inversion Sigil; preparation is crucial before starting The Siege.

Once the player has killed 100 mobs, the mobs spawned during The Siege will disappear, Endermen will start spawning in The End again, and the first activated Division Sigil in the player's inventory will be stabilized into a Pseudo-Inversion Sigil.