This page is about the Null Cell from Project Red. For other uses, see Null Cell.

The Null Cell is a redstone circuit added by Project Red. It functions as a bridge for two crossing redstone lines. (see Usage). 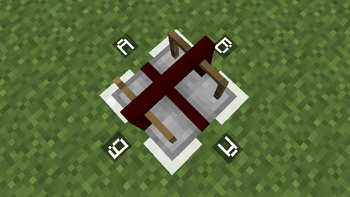 For an easier usage, NEI and WAILA could be installed, which show the A and B sides on the Null Cell.

The Null Cell has two A and two B input/output sides, located opposite. It can connects to red alloy cables, redstone, an adjacent circuit, machine, lamp or anything that can be controlled with redstone signals.

The gate serves simply as a substitute for a more complex structure of such as stone blocks to bridge two crossing redstone lines. Redstone signals are transmitted between the A-sides and B-sides.