This page is about the NAND Gate added by Project Red. For other uses, see NAND Gate.

The circuit would be possible with Vanilla redstone mechanics, but this block reduces the size of the circuit to 1 block. This makes complex circuits clearer and easier to control. In electronics, this gate enables the physical execution of the Boolean function "NAND (negated AND)". 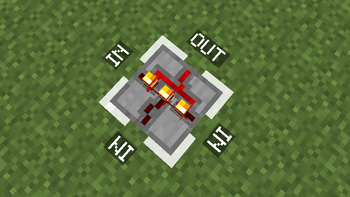 A NAND Gate with input and output sides indicated by WAILA

For an easier usage, NEI and WAILA could be installed, which show you the input and output on the NAND Gate.

The NAND Gate has three input sides and one output side for red alloy cables, redstone, an adjacent circuit, machine, lamp or anything that can be controlled with redstone signals.

The inverse version of this gate, is the AND Gate.

Using the Screwdriver from Project Red, the orientation of the gate can be changed freely in all four directions. Furthermore, using the screwdriver in crouching, the input sides can be turned off and on again in various combinations.