This page is about the Multiplexer added by Project Red. For other uses, see Multiplexer.

The Multiplexer is a redstone circuit added by Project Red. It is a logic gate for complex redstone circuits. It allows to switch the signal transmission between one of the two input sides and the output side (see Usage).

This logic gate is used in the same way as multiplexer (mux) in electronics. 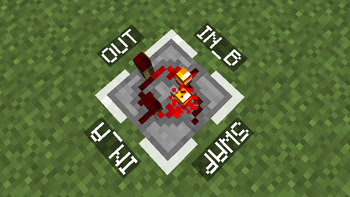 For an easier usage, NEI and WAILA could be installed, which show the input and output on the Multiplexer.

The Multiplexer has one output side, an "IN_A", an "IN_B" side, and a "swap" side for red alloy cables, redstone, an adjacent circuit, machine, lamp or anything that can be controlled with redstone signals.

If there is no signal on the "swap" side, then it forwards the signal at "IN_B" to the output. However a signal on "IN_A" is blocked.