The Module Toggler is a machine in Steve's Carts that, when placed next to an Advanced Detector Rail, can dynamically activate and deactivate certain modules on passing carts, depending on which direction they are traveling. 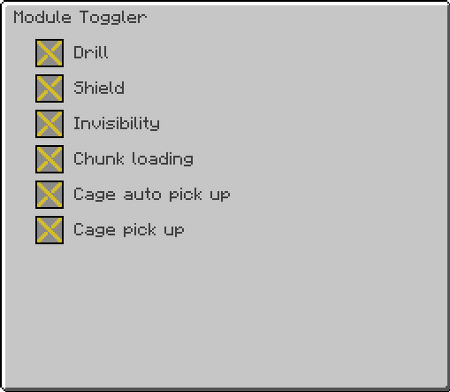 The Module Toggler GUI is fairly simple, offering controls for activating and deactivating the following Modules:

The last two controls correspond to the two different buttons in the Cage GUI: toggle the Cage's auto mob pick-up feature, and load/unload a carried mob.

The Module Toggler must be set up next to an Advanced Detector Rail in order to work correctly. On each side of the Toggler, there is an orange arrow and a blue arrow pointing in opposite directions. These arrows correspond to the colors referenced in the Module Toggler controls. Essentially, when a cart crosses the Advanced Detector Rail next to the Toggler, the direction it is going determines what action the Toggler takes. If a cart is heading in the direction of the orange arrow, the orange action is performed; if in the direction of the blue arrow, the blue action is performed.

As an example, the Module Toggler might be configured to deactivate an attached Drill module as the cart travels on its way to unload its inventory at a Cargo Manager, in order to avoid destroying sensitive machinery on the way. When the cart returns and passes the Module Toggler headed in the other direction, the Drill is re-activated, in order to continue mining for resources.