The Lightwell is a block added by Astral Sorcery. It is used to generate Liquid Starlight. It is only able to hold 2 Buckets' worth of Liquid Starlight. In order for generation to occur, one must place an Aquamarine or Rock Crystal above it. After placing, the gem or crystal cannot be used elsewhere and will shatter after a while; Rock Crystals last longer than Aquamarines. 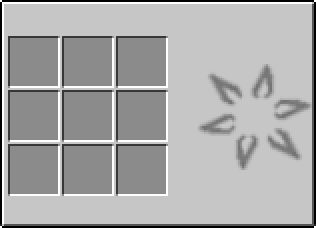 “
”
At night, a strange crystalline liquid seems to collect on aquamarine gems and rock crystals. On closer examination, the liquid seems to be of a condensate of pure energy derived from starlight.

A carefully carved basin on marble makes the collection of this liquid quite easy. The liquid emits a bright and pure light, feels very cold and a bucket full of it weighs almost nothing.

In order to use the Lightwell, an aquamarine gem or rock crystal needs to be placed on top to condense starlight into liquid. Gems and crystals used to gather starlight will constantly degrade until the point of completely shattering. Once placed on the lightwell, they cannot be used for any other purpose than collecting starlight.

This liquid starlight seems to have interesting interactions with rock crystals and other liquids, perhaps this warrants some experimentation.
— Astral Tome