Feed The Beast Wiki
Register
Don't have an account?
Sign In
Advertisement
in: GregTech 4, Energy production, EU Power, Machines that use lightning

The Lightning Rod is a Energy Units (EU) generator added by GregTech 4, which generates EU from lightning. One lightning bolt is instantly converted into 25 million EU, which is emitted at 8,192 EU/t. Note here that if for example 2 cables are connected, the total output stays the same, emitting 4,096 per cable.

To increase the chance of a lighning bolt striking, place Iron Fences on top of the rod. The more fences that are placed above it, the more, the more lightning that will hit the rod. Note hereby that only fences directly above the rod are counted as part of the lightning rod, so building a net of fences won't work. The fences also have to be connected directly to the rod itself, and there may no blocks above it. 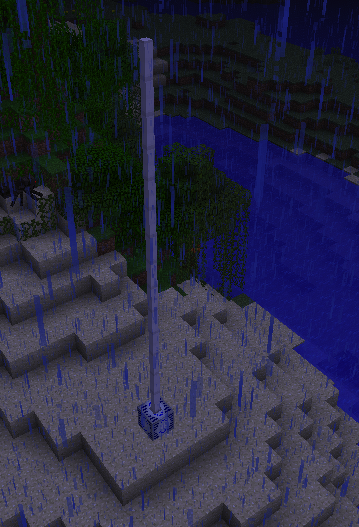 Only the Matter Fabricator is capable of handling the Lightning Rods power, for other machines transformers should be used. Recommended by this is to place 4 HV-Transformers around the rod, since each transformer has an output of 2,048 EU/t, this to drain the rod at maximum speed.

The Lightning Rod has an internal storage of 100 million EU, thus capable of holding 4 lightning bolt. Any extra generated energy is discarded. It takes about 2.5 minutes to drain the Lightning rod at maximum speed.

During a lightning storm, every 12.8 seconds there is a chance of a bolt striking the generator

During normal rain there is a small chance the lightning rod will work, but only if the rod is over 128 blocks tall. The generator will only work at 10% efficiently though.

To prevent exploit, some forms of lightning don't generate energy. These include: