This page is for Legacy Fabric only. Any information listed is not compatible or related to Fabric, Fabric API, or Cursed Fabric; They are all completely separate projects.

Legacy Fabric is a side project of Fabric made for versions before 1.14 snapshots. It is currently under development but has support for Minecraft version 1.8.9 with some mods, libraries, and APIs that developers and players can access. Not to be confused with Cursed Fabric which is Fabric on Alpha and Beta versions.

Installing Legacy Fabric for 1.8.9 is the same as installing Fabric on version 1.14 and later on the base game or MultiMC.

Installation is the same as Fabric only a Legacy Fabric Installer is needs to be used as the loader versions for these are separate and unrelated to regular Fabric.

Image of Legacy Fabric Discord channels that are being considered for development. Many of these are only at the stage of working on the Yarn parts of Fabric not Fabric API or actual mods yet.

A screenshot showing the .minecraft folder (left) and the resource packs menu (right). Only applies to the vanilla & Curseforge launcher installation guides.

A capture showing the 1.8.9 Legacy Fabric version appearing among 1.16 versions. This is to show that they won't appear among versions with the same version number. The profile needs to be re-selected as the launcher does not recognize this the same way Forge profiles do.

A capture showing Legacy Fabric installed for 1.8.9. This is a good sign it installed correctly rather than resulting in a crash.

Showing how to install Legacy Fabric through MultiMC via the 'Import from ZIP' tab.

Ensure that a Legacy Fabric profile on the Mojang launcher is installed first as it is required. This installation method does not have full support of modpack exports or profile retention. This tutorial differs from the regular Fabric tutorial due to the fabric and mixin.out folders not being required for this tutorial. Until a Jumploader like solution is implemented this is the only possible method currently available.

Showing the 'Install' folder and that users need to go to the 'versions' folder to paste the Legacy Fabric version. 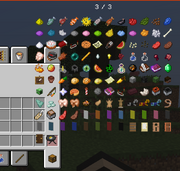 Legacy Fabric only supports mods and coding aspects for Legacy Fabric-supported versions, which excludes Fabric 1.14+, Forge (any), Liteloader (any) or Rift (1.13 and 1.13.2).

Showing a few of the settings ChromaHUD has that can be applied to a profile.

A screenshot showing the FPS, CPS, Armour, Coordinates and a few others (only a few of those included) enabled in-game.

Very little coverage of Legacy Fabric is available to players. But a playlist has been made for any installation tutorials for launchers and showcasing mods available for players to see what is accessible.[6]