The Large Railer is an attachment module that allows minecarts in Steve's Carts to place their own track in a straight line as they go. It is an upgraded version of the Railer.

The Large Railer is created with six Iron Ingots, two Railers, and one Track. 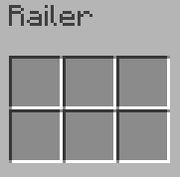 When mounted on a cart using the Cart Assembler, the Large Railer allows a minecart to lay its own Track as it goes. The Large Railer has six inventory slots that can be filled with Tracks. As it travels, it will place the track in its inventory in front of itself, if there is no track already there. It can be used to set up long, linear rail lines on its own, but when paired with other modules, it becomes much more useful. When used in conjunction with a Drill, the cart can mine long tunnels underground or through mountains. When paired with a Bridge Builder, it can cross gaps when it comes to them, or even build a raised rail line. The height of the track and bridge can be determined by using a Height Controller.