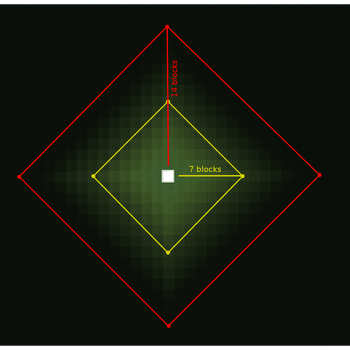 The light cone of the Inverted Lantern is the same as that of the Lamp (shown in this picture). (yellow cone = no mob spawn / red cone = light zone)

The Inverted Lanterns are light sources added by Project Red. Inverted means that they don't need a redstone signal to illuminate. An incoming signal leads to turn off the Lantern. The inverted version is the Lantern.

There are 16 colors for the Inverted Lanterns (see below).

The Inverted Lanterns form a quadratic cone of light and the luminosity amounts to 14 spaces straight in all 4 directions from the block. However, the light is so strong that no mobs spawn only up to a distance of 7 blocks.