The following guide was originally written by Gideon Seymour. Formatting and tweaks have been done by other editors on this Gamepedia.

Heyo, I'm Gideon. As you may or may not know from my work on Running Red, I've been working with HQM quite a bit. Although there are quite a few videos out there, there are no real text and image based tutorials on how to create a Modpack with the mod. So, I've decided to make one. Enjoy!

Setting up your instance 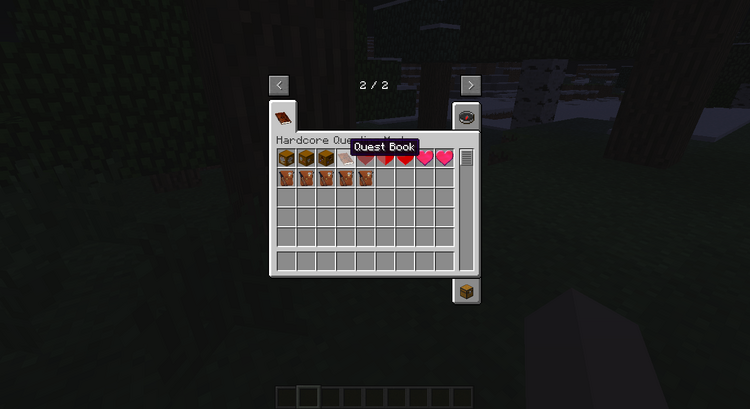 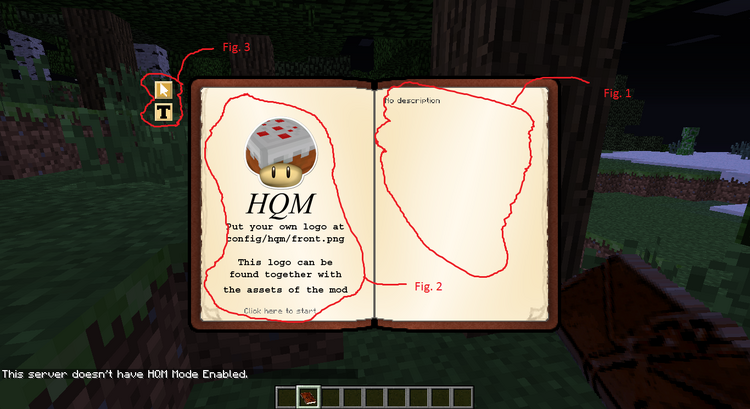 Fig. 1: This is an awesome text box that the players can read when they first open up the quest book in your modpack. You can edit this to read whatever you like, and later, even add in a file to narrate it!
Fig. 2: This is the logo that players will see when they open up your book. Later, I'll show you how to edit this and add in your own, unique logo!
Fig. 3: This is your Tools Bar. You'll use the tools in this very frequently throughout the creation of your quests. You can click on a tool to select it for use. On this page, there are only two tools available:

This is the tool you'll use to navigate your Questing Adventure. Left-click on things to select them, or to deselect them if necessary. You can enter new menus with this, and exit the menu by right-clicking.

The Text Editor is a useful tool that is pretty self-explanatory. If you have it selected, you can edit anything with text! Hey. Remember Fig. 1? That had no text? What if we clicked on it with this tool? 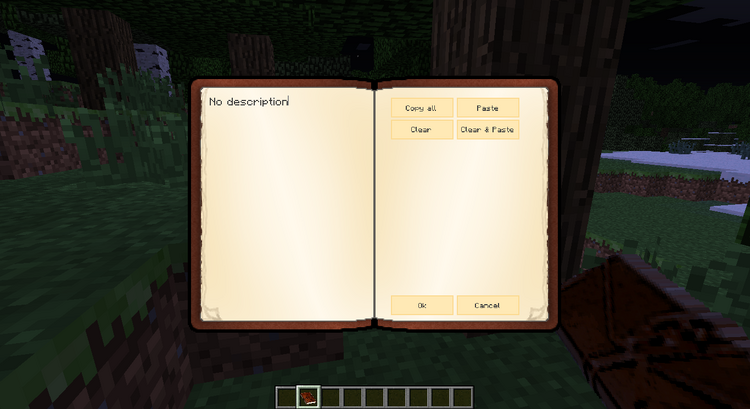 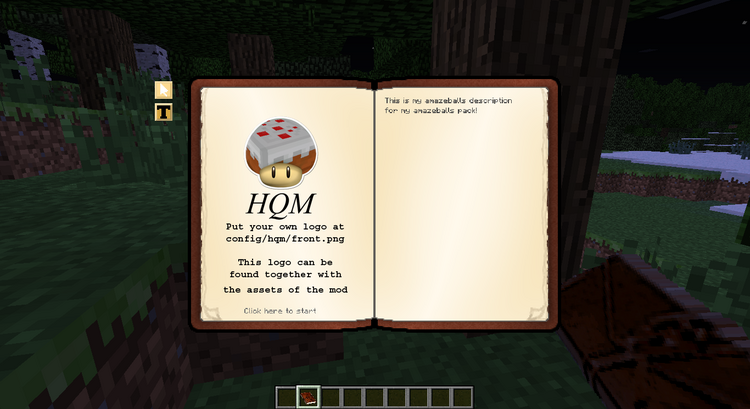 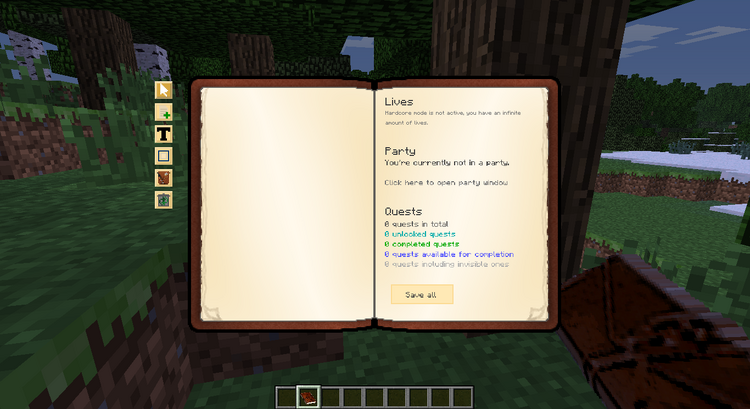 Woah. There are a lot of new buttons here. Let's take them one by one.

In order to understand this button, we first have to understand the idea of sets. Sets are what contain all the quests we're going to create. You can have several sets, filled with all different types of quests.

This button has no use right now, but it will come in handy later. It allows us to select a set to move quests between. It's like moving a file between folders, but a quest between sets. I'll get into it more later.

This button allows you to edit the Reward Bags, which are basically little goodie bags that can be given out to your players every so often. Once again, more detail later.

This is a very scary button that you should be careful with. When you have this button selected, everything you click on will be deleted. Forever. Only use this in a case of emergency.

Located down on the lower right, this button allows you to save all of your progress, in case it is lost. If you exit the game without pressing this button, everything you've done will get itself undone, which we NEVER want to happen. So make it a mental note: every time you are going to exit, hit this button. 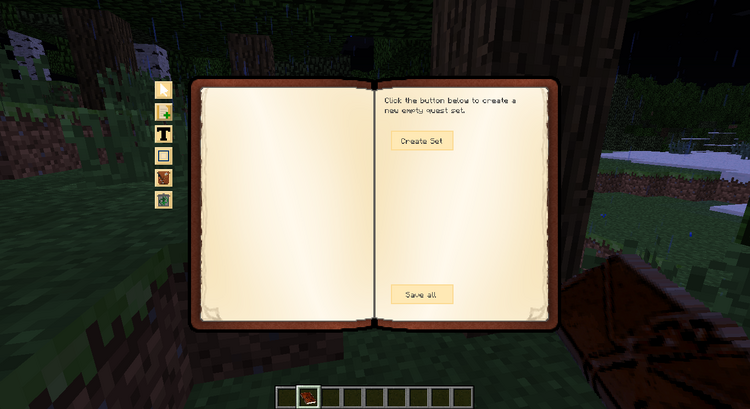 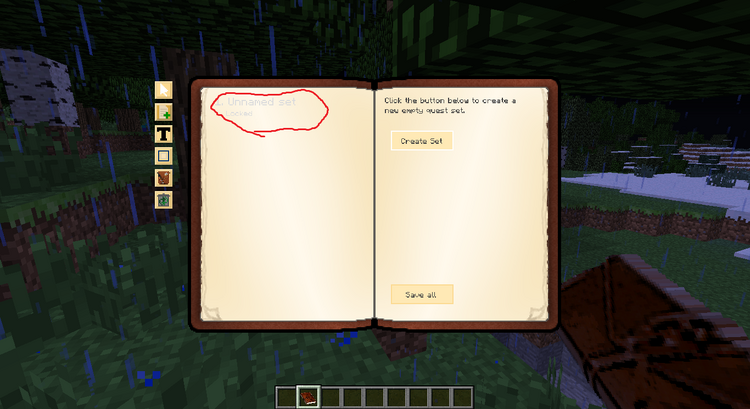 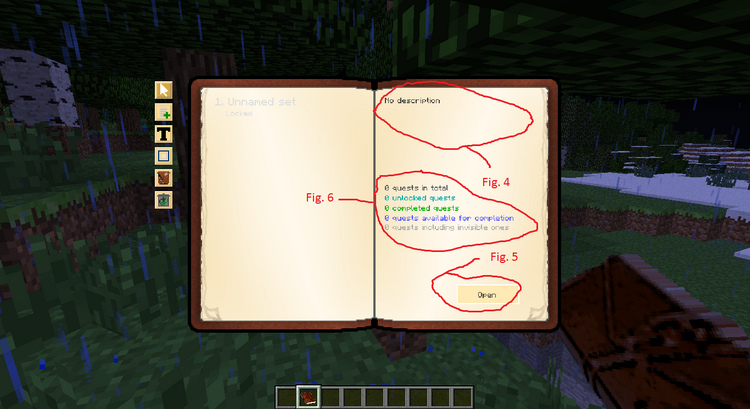 Fig. 4: This is the description for our set! We can edit this with the Text Editor, and whenever a player selects this set, they'll see this description, all ready for them to read!
Fig. 5: This is what you would click with your Cursor in order to access the quests inside the set. It's like opening up the folder we compared the set to earlier!
Fig: 6: This is the informational section that tells us and the player how many quests are contained within the set, and what types of quests they are. 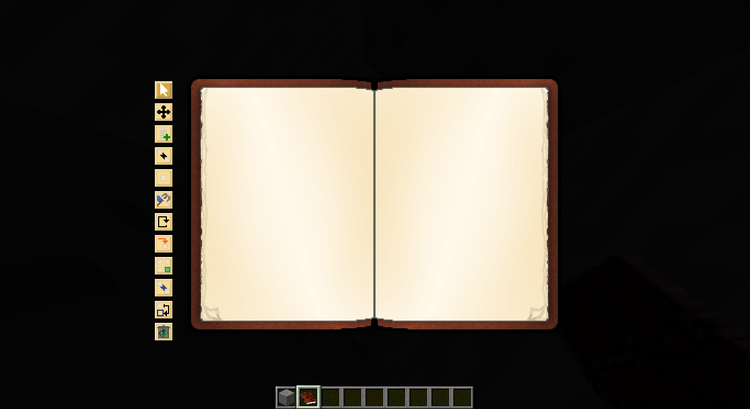 This tool, once selected, allows us to click and drag a quest around the screen! It's helpful for making things look nice and be aesthetically pleasing to the user.

Hey! This tool looks familiar! It's the Create Set Tool! Well, basically. Once we're inside of a set, this tool changes uses. Instead of allowing us to create new sets, this allows us to create new quests! We'll be using this shortly.

This tool allows us to link quests together. It allows us to designate that one quest should be completed before the next is unlocked. We'll go into more detail on this later.

This tool is more aesthetic than the other tools. This one allows us to change the visual size of the quest, to make it appear bigger than the others. This has no affect on gameplay, but it sure does look nice!

This tool, like the Text Editor, is a good friend that we are going to be using A LOT. This allows us to change the item associated with a quest, reward, or goal. We will be using this shortly, as well!

This tool allows us to set the repeatability of a quest. We can have a player repeat a quest every few hours, having it unlock itself after an interval, or have it wait to unlock itself until a certain amount of time has passed since the last completion.

This tool allows us to set the trigger for a quest, or quests after. We would use this tool in order to make quests invisible or locked until a certain requirement has been reached. We'll go into much more detail about this and the Repeatability Tool later.

This is a fun tool that allows us to bind two quests together. Once you've completed one of the bound quests, you can't complete the other! :O

Earlier, back when we were on the Set screen, we had the ability to select a Set to move things to. This is the tool you would use to actually send the quests to the selected set. Think of this like dropping the quest in the mailbox. Selecting the Set is like addressing the envelope! 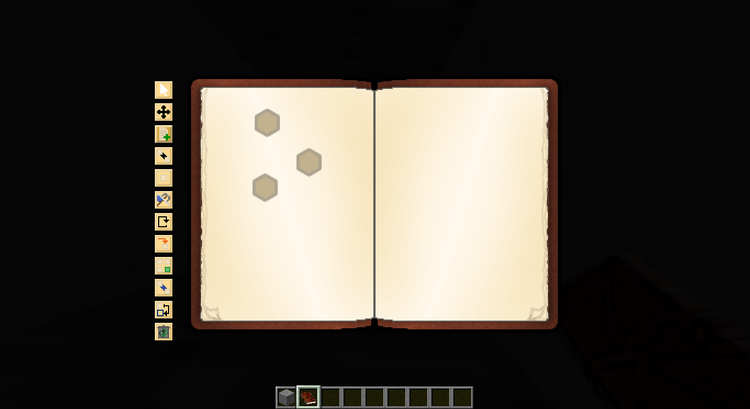 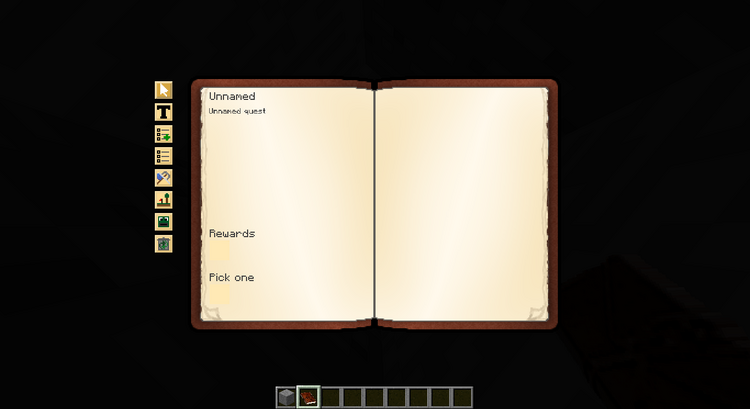 This is similar to the Create Quest and Create Set tool. It lets us create a task to tell the player exactly what they need to do. There's everything from Crafting Tasks to Killing Tasks.

This is simple, but useful. This tool allows us to select an already made task and switch the type of task it is.

Say we wanted the player to go somewhere. This is the tool we would use to designate that location.

This tool, like the Edit Location Tool, allows us to tell the player which monster they have to kill! 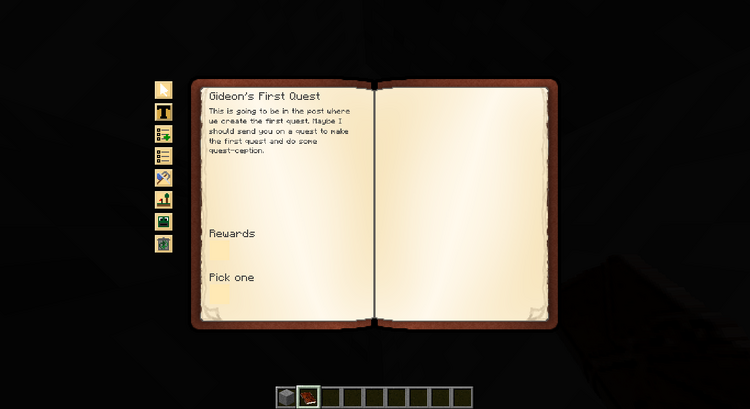 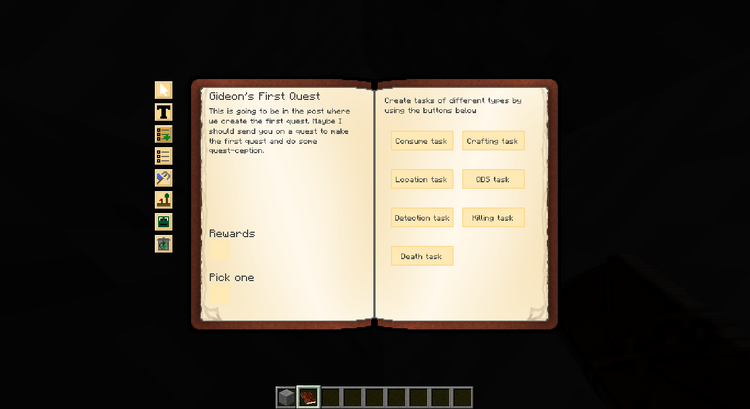 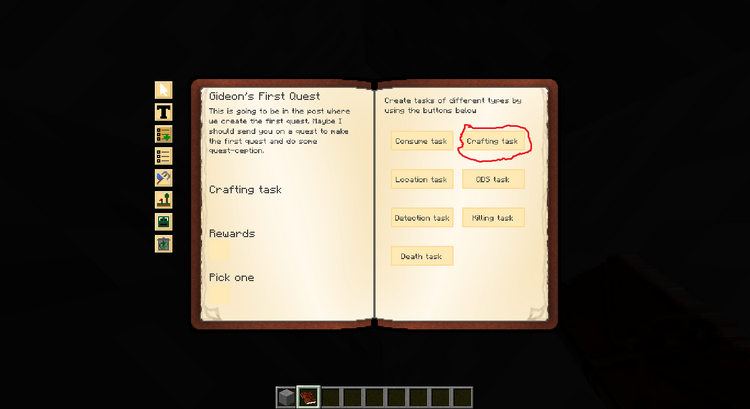 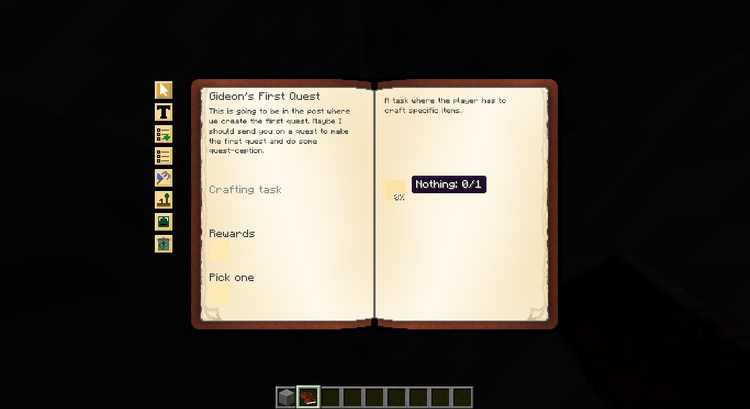 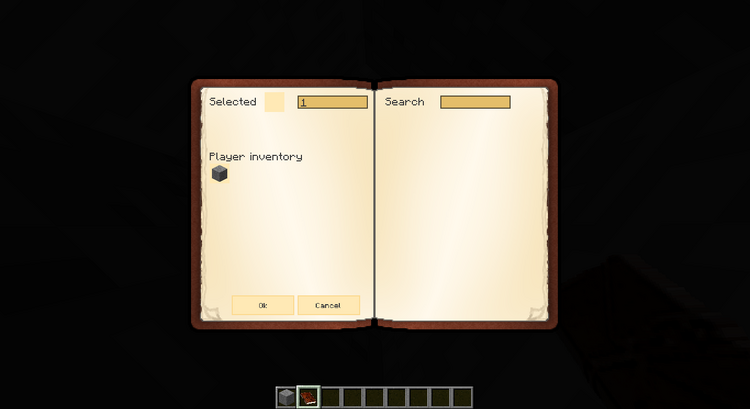 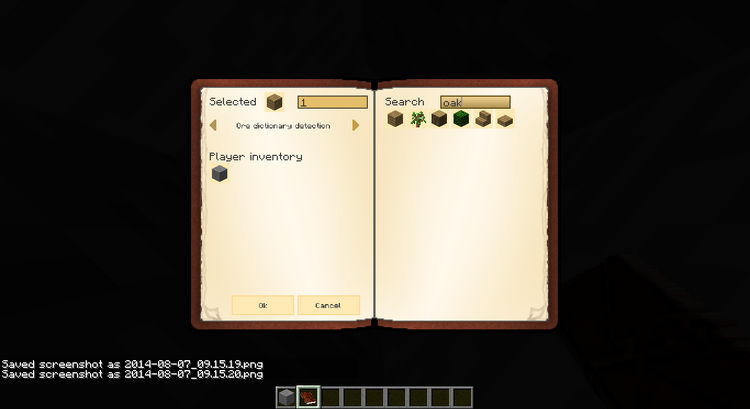 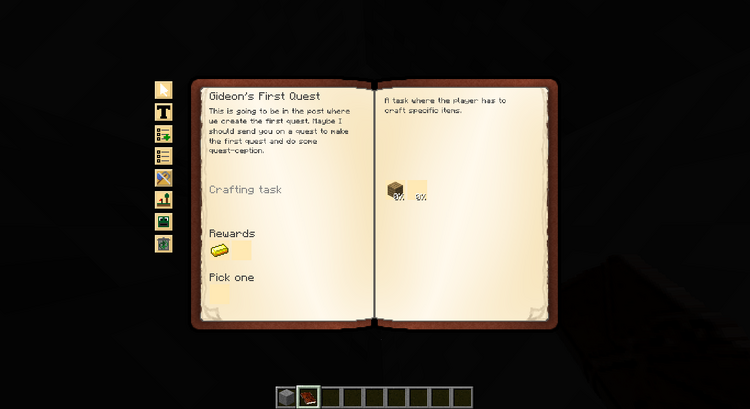 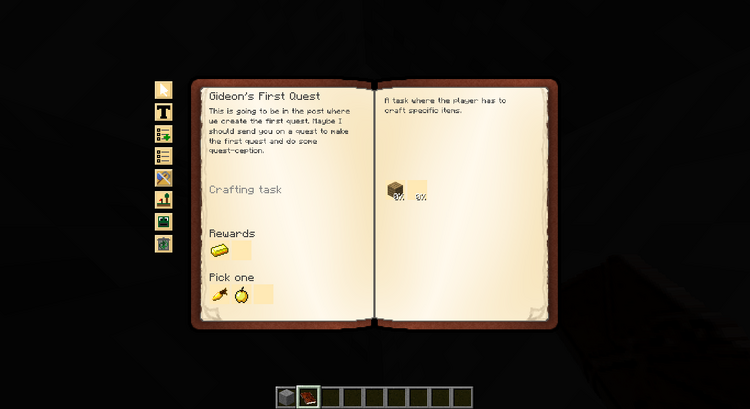 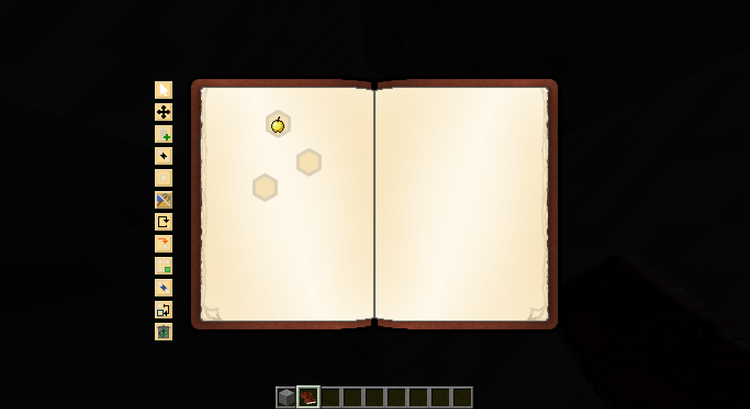 Triggering quests from another set

To have a quest trigger from another page, it's best to first make the quest on the page you want the triggering quest to be located.

To do this with an existing quest you already have on page 2, simply move it to page 1 and link it to the quest you want as the trigger. Then repeat step 1 again.

Another button that should be explained is the TRIGGER button. If you want a quest to remain invisible until after a certain stage or previous quest has been completed, you can use the trigger feature to make the quest complete the first listed task on that quest before it will become visible. Ideally you would make the first task something that has either been awarded or obtained/crafted during the previous quest, to trigger the visibility on the 2nd quest.

Example: In quest A you have to make a furnace. Quest B on the same or another page is invisible until the first task on it triggers. You make the first task for quest B a Detection task for a furnace. These quests do not need to be linked.