< GregTech 5
View source
watch 02:40
World of Warcraft: Dragonflight - The Loop
Do you like this video?
Play Sound
This page contains changes which are not marked for translation.

Since version 5.0 (for Minecraft 1.7.2) GregTech has its own Energy System since GregoriusT was not satisfied with IC2 Experimental's Energy System.

“
”
The reasons of why I removed compatibility to the IC² Enet are that Cable Loss doesn't work, that the Network doesn't have Packets anymore and that it switched from Integer to Double (what is horrible for larger Energy Storages). Not to mention that it is very hard to have control over Energy flow without constantly registering and unregistering TileEntities.
— GregoriusT

GregTech uses the terms Voltage (V) and Amperage (A) to describe its new Power system. One "Amp" is roughly the same as one EU Packet from IC2, and "Voltage" is the size of that packet.

Unlike the IC2 energy system, all GregTech energy-interacting blocks have limits on both the Voltage and the Amperage they can interact with.

You do need to be careful when trying to power machines:

Machines and recipes each have voltage tiers. The tier of a Multiblock Machine is determined by its Energy Hatches. Machine and recipe tiers do interact, and must be paid attention to.

Recipes can be overclocked multiple times if a machine is more than one tier above a recipe's tier.

GregTech has 10 Voltage Tiers as of version 5.0.

Given that GregTech has its own power system now, you will need to use GT cables for powering GT machines. Do note that the only machine capable of accepting IC2 EU in GT is the Transformer (Not to be confused with the IC2 Transformer).

All GT Cables have a max Voltage, max Amperage and a Loss:

Do note that Uninsulated Wires have 2x the loss as Insulated Cables.

Here is an example:

Below is a table of the current properties of various types of cables in GregTech:

(*No insulated Cable version) (**No crafting recipe yet)

Also any GT Block and Battery outputting Energy has an energy loss on output. This means there is no such thing as lossless cables in GregTech.

So the turbine takes 34 EU from its storage, voids 2 EU per packet and then outputs 32 EU.

Here is a table documenting some of the cable properties in GregTech:

The EU loss of GregTech Cables and Batteries scales linearly with the number of sequential Cables and the number of Batteries, but since voltage is topped up at every battery there will be a loss that is increasing exponentially for every identical segment of a Battery and x-number of Cable links. This exponential loss from more batteries also reduces the impact of the linear loss, but this ofc comes at the cost of more exponential loss. This means that there must exist a sweet spot, because with short segments the extra exponential loss of more segments will be more detrimental to the efficiency than the linear loss from making each segment longer, for long segments this will be reversed. So lets do the math!

But this is no good since we want to figure out the optimal length when there is an element of exponential decline that we haven't accounted for. We do this by making an expression of how much efficiency we get in each single block if there was a uniform exponential decline over the whole segment. This turns out to be ((8 * 4^T - (D - 1)L) / (8 * 4^T + 2^T))^(1 / D).

We now take the derivative of that expression with respect to D to get how the efficiency changes when we change the length of the segments, when we do this we get such a ghastly monstrosity that not even WolframAlpha can deal with it algebraically. But this wont stop us on our quest for efficiency! Lets solve it numerically!

GregTech machines does not accept EU from IndustrialCraft² cables and some other mods EU powered blocks does not accept GregTech cables, thus there is the need to convert IC2 EU and GT5 EU back and forth.

Prior to GT5U 5.09.33.01, GT5 cables used to refuse to receive IC2 EU. To convert IC2 EU into GT5 EU, one needed to connect (read put directly adjacent) a GT transformer input to an IC2 Energy Source output side. This means connecting the output dot of a IC2 transformer/storage block to the input dot of a GT transformer.

As of the aforementioned version of GT5U, GT5 cables can receive IC2 EU and send it to GT5 machines. 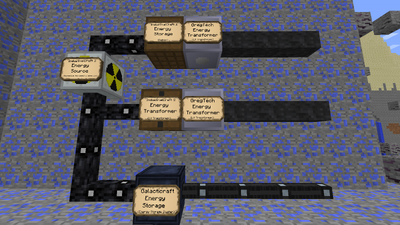 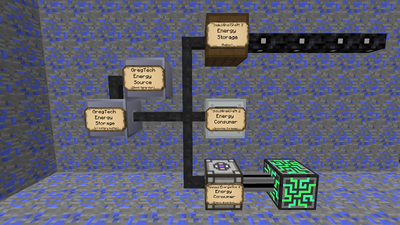 Conversion from GT5 EU to AE

To convert GT5 EU into Applied Energistics 2 "AE", connect GT cables to Energy Acceptor. Note that the conversion is performed in a somewhat lossy way: GT5 cables transmit an EU packet as long as the Energy Acceptor is demanding some amount of energy, and the entire packet is consumed regardless of whether there is excess EU in the packet that the acceptor doesn't actually need. This means sending overly large EU packets to the acceptor wastes a large portion of EU most of the time. On the other hand, GT5 cables tries to inject as many EU packets (i.e. amperes) in a single tick until the Energy Acceptor stops demanding energy, so sending overly small EU packets occupies more capacity of available amperes.

Conversion from GT5 EU to gJ

GT5 EU can be converted to Galacticraft Joule (gJ) by connecting GT cables to gJ accepting machines. The conversion rate is the same as that of IC2 EU to gJ.

Conversion between GT5 EU and RF

When the configuration item OutputRF in GregTech/OverpoweredStuff.cfg is set to true, which is true by default, GT5 cables can be connected to Redstone Flux (RF) accepting blocks and can send EU as RF at the conversion rate of 100 EU to 360 RF by default. If RFExplosions is also true, which is false by default, the cable explodes when it ’’attempts’’ (not succeeds) to transmit 600 times more RF than the block can store at once.

Unlike the AE2 case, converting from EU to RF is lossless. GT5 cables have an RF buffer to store excess RF that hasn't been consumed yet, and they try to use the stored RF before consuming the next EU packet.

When the configuration item InputRF is set to true, which is false by default, GT5 Transformers can receive RF from their input side at the rate of 100 RF to 20 RF by default.