The Foxhound is a hostile mob added by Quark.

Foxhounds spawn in groups of 4 to 6 in the Nether on Netherrack. As a hostile mob, they contribute to the hostile mob cap. This may be considered as a bug[1] as they do not adhere to the standard despawn algorithm and will not despawn even if they player exceeds a distance of 128 meters from the mob. This can impact the spawn rate of other mobs drastically.

Foxhounds are similar to the Wolf in appearance and behavior. Like most mobs native to the Nether, they are immune to fire damage. Foxhounds growl and will attack skeletons. An attack from a Foxhound damages the player and sets them on fire.

They are tamed with Coal rather than Bones. Fire Resistance is also needed to tame one. Tamed foxhounds will snooze on top of hot blocks such as Magma Blocks. When a Foxhound sleeps on an active Furnace it will speed up the Furnace's operation speed. This effect does not stack.[2] Rather than being fed coal after tamed, it will only eat rotten flesh, both to regenerate or breed. To breed Foxhounds, feed 2 tamed Foxhounds rotten flesh

Foxhounds are small creatures and are able to pass though a 1x1 hole. 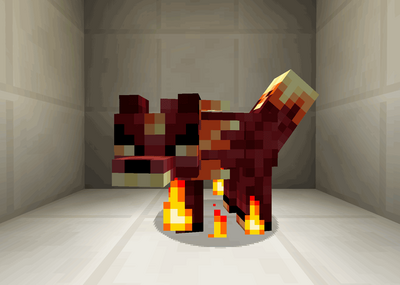 Foxhounds can drop 1-3 Leather when killed. They can drop an extra Leather if killed with a Looting-enchanted weapon.

They may also drop 1 piece of Sulfur.