This page is about the Fluid Pipe added by BuildCraft. For other uses, see Fluid Pipe. 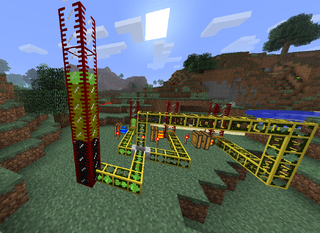 Liquids separating in a tank

Fluid Pipes, before BuildCraft 4.x called Waterproof Pipes, are a type of pipes from BuildCraft that move liquids around in a similar manner as Transport Pipes. These pipes are created by combining Transport Pipes with Pipe Sealant.

Different liquids will not mix together in the same pipe. However, if two pumps are pulling out different liquids and there is an empty pipe after one of the liquids passes through, the second liquid may be pumped into that empty pipe. When the two liquids reach a tank, the liquids will separate for each block of tank if there is space (shown in the picture). If there is no extra space for the second liquid, it will backup and clog the piping system.

Following the nine different Fluid Pipes and their functions: