This page is about the Fermenter added by Immersive Engineering. For other uses, see Fermenter.

The Fermenter is a 3x3x3 multiblock structure (previously its own block) added by Immersive Engineering. It is used to make Ethanol.

After it is fully arranged, right-click the central Cauldron with an Engineer's Hammer to complete the multiblock structure. 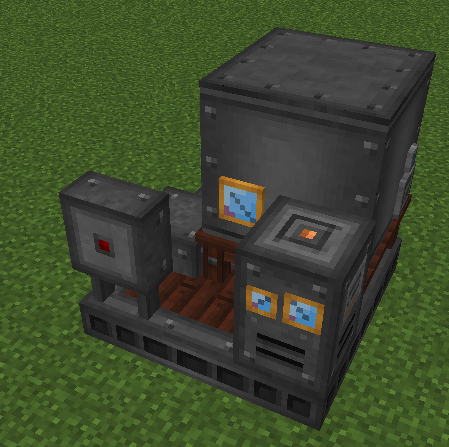 After it is fully arranged, right-click one of the Fermenter blocks with an Engineer's Hammer to complete the multiblock structure.

Putting a reactant in one of the left-hand slots will start the process. 6400 Redstone Flux (RF) is consumed per use. After about four seconds, the substance will be converted into Ethanol.

RF can be received from the top and bottom central blocks, and Ethanol can output from the bottom-central block of each side. Since the Fermenter has 8 slots, it can perform up to 8 operations simultaneously.