Crafting Grids are an important aspect of almost every article on the wiki, used to inform readers about how they can obtain the items and blocks they are reading about. This wiki has a dedicated set of templates, originally created by Jinbobo, for use in displaying these grids. It is extremely important that this template syntax is understood and used correctly by all editors. This guide page has been written for that purpose.

As a general note, remember to preview pages before you save them, until you fully understand how everything works and are comfortable with it. It allows you to make sure the page was built and displays correctly, and more importantly it allows you to make sure you did not make a mistake when calling a template (like, say, forgetting the brackets used to close it).

All Crafting Grid templates are named and called using the following convention:

A full list of available crafting grid templates can be found here. If a crafting grid is not available, please post a request on the discussion board or be BOLD and make it yourself.

Each location within a crafting grid that can contain an item will have a specific cell name that corresponds to it. The cell names can vary across different grids, so it it is important to always read the templates’ documentation pages. If no item is to be placed in a specific cell of a crafting grid, it does not need to be entered into the template call. For example, when designating cells in {{Cg/Crafting Table}}, the columns are (from left to right) A→C and the rows are (from top to bottom) 1→3, with the letter being first and the number second (A1 for the top-left cell).

The cells are filled by using the templates {{G/Cell}} and {{G/O}}: Template:Grid/Cell and Template:Grid/Ore Dictionary. These will be explained later in this guide, but in short, their purpose is to take the name of an item, or an Ore Dictionary tag name, and display an image of it, which also displays a tooltip when the mouse is hovered over it. The choice between which to use is dependent upon how the recipe in question is defined by the mod that adds it. To find that out, it is usually necessary to look through the mod’s source code for where the recipe is added. A program such as JD-GUI may be helpful for this, though many mods have their source visible in code repositories on websites such as GitHub and BitBucket.

{{G/Cell}}, abbreviated as {{Gc}}, is the standard template used to display items. It requests an item name and an abbreviated mod name, and displays an image of that item and a link to that item’s page. A list of abbreviated mod names can be found here. {{Gc}} can also accept an alternate page for the image to link to (or link=none for no link), alternate text to use for the tooltip, and a stack size to display for the item it displays. The text to use for the tooltip is defined with the parameters title= and desc=. title= changes the displayed item name and desc= adds additional lines of descriptive text to the tooltip. Both title= and desc= accept formatting codes as defined in {{Tooltip}}. (Use / to produce a new line, & for formatting codes, and \ to end the use of a formatting code.) Related to link= is dis=, a true/false parameter (true by default) that sets whether or not the image links to a mod-disambiguated page title (e.g., {{Gc|mod=V|dis=false|Stick}} would link readers to Stick when clicked on; removing dis=false would direct readers to Stick (Vanilla)). Do not define both dis= and link= in a single use of {{Gc}}.

Shown below are one incorrect and four correct uses of {{Gc}}:

If a mod= parameter is not properly defined, the following error will be displayed:

Shown below is the template call for the recipe of a Diamond Pickaxe as it would be defined in vanilla Minecraft.

The Ore Dictionary is a component of Minecraft Forge, designed to allow ores and ingots of the same type to be used by different mods and treated as the same. The FTB Wiki contains an OreDict extension, allowing Crafting Grid displays to do the same.

Shown below is an isolated use of {{O}}.


Shown below is the template call for the recipe of a Diamond Pickaxe, using the Ore Dictionary.

{{O}} should not be used for displaying crafting grid outputs (O=) unless the mod actually outputs an OreDictionary tag instead of a specific item. However, this is generally considered a bug in the mod and should be reported to the author(s) immediately.

The images displayed by {{Gc}} and {{O}} are retrieved from Tilesheets, large image files of every block and item added by a mod, and linked to by a server-side registry. A list of all tilesheets currently on the wiki can be found on Special:SheetList and a list of all items stored in all sheets can be found on Special:TileList. If {{Gc}} is given the name of an item that does not appear in a tilesheet, or is given the wrong mod name, {{Gc}} will display a flat red box. An example is shown below.

If this occurs, an error will also appear under Tilesheet extension warnings in the page preview.

If this occurs when editing a page, check to make sure the mod abbreviation and item name are set correctly (check the Item List to be sure), and if you are sure that the red box comes from a missing tilesheet entry, finish your editing, save the page, and report the missing entry on the Tilesheet requests page.

In certain rare cases, the name of an item in a tilesheet will not match the name of the item in game. This is usually done deliberately by the wiki staff member who set up the tilesheet, as an individual tilesheet cannot contain two items with identical names. If this is the case, the {{Gc}} parameter title= should be used to change the tooltip to display the correct item name.

Mod abbreviations can be added and viewed on Module:Mods/list, as well as on the #FTB-Wikiconnect, using TheSatanicSanta’s bot.

Multiple recipes in a single grid

If an item is only defined once in a crafting grid slot, it will be used in that slot in all displayed recipes. To display a blank slot in a grid, define an empty {{Gc}} in that slot.

An example of a paged crafting grid is shown below.

Alternatively, editors may wish to use {{N}} to animate cells, especially if there are many possible candidates for a component but excludes a few such that {{O}} cannot be used.

Tank Cells are not a feature used in all crafting grids, but certain mods add machines that have internal fluid tanks, and have recipes that consume fluid from those tanks. Tank cells are never used in isolation; they are only ever used in crafting grids that would use them. Tank cells are filled using {{T}}, Template:Tank. {{T}} is called with a fluid name and an amount in mB, millibuckets.

A small number of alternate crafting grids also have areas in them that show internal energy storage and/or energy consumed by a recipe. These visual displays also use {{T}}. An example of this is shown below

Certain crafting recipes require strings of text or numbers as inputs to their recipes. For cases like this, use {{S}}. Shown below is an example of a (rather complicated) crafting grid that requires string inputs. 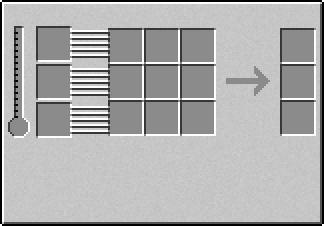 What not to do

While {{Gc}} and {{O}} can be used outside of crafting grids, the images they produce are sized and formatted specifically for use in crafting grids, and as such they do not fit well into the text of regular pages. Using them in an {{Infobox}} is, however, expected. Using {{P}} and {{Pn}} is preferred in tables or in text.

When in doubt, view the source of some pages recently created, or ask editors for help.