Following the Minecraft Wiki's style guide for entity renders it could be possible to give all mobs a proper isometric render instead of just the Spawn Egg and some screenshots. Example with the Twilight Forest Ur-Ghast.

If you want to try it, install Mineshot (go Releases and pick the correct jar for your version), make a void superflat void (or with Barriers that's easier), spawn the mob with {NoAI:1}, press Numpad 5 to toggle the isometric camera (there are other controls shown in the github page) then take a screenshot, erase background and crop in some image editing software.

We'd probably need to agree on roughly what size to shoot for on the pictures (since monsters have different sizes can't really use the same zoom for everything), and also maybe get some big list of TODO articles if we do agree on doing that for all of the mob articles. Lykrast (talk) 22:42, 2 November 2017 (UTC)

I support this as long as the backgrounds are transparent. What if we had the renders for the infobox image (still having the spawn egg as the infobox imageicon) and then proper "natural habitat" images in the article body? That makes sense to me personally. -- SatanicSanta🎅FTB Wiki Admin 19:17, 3 November 2017 (UTC)
My first attempt is rough. 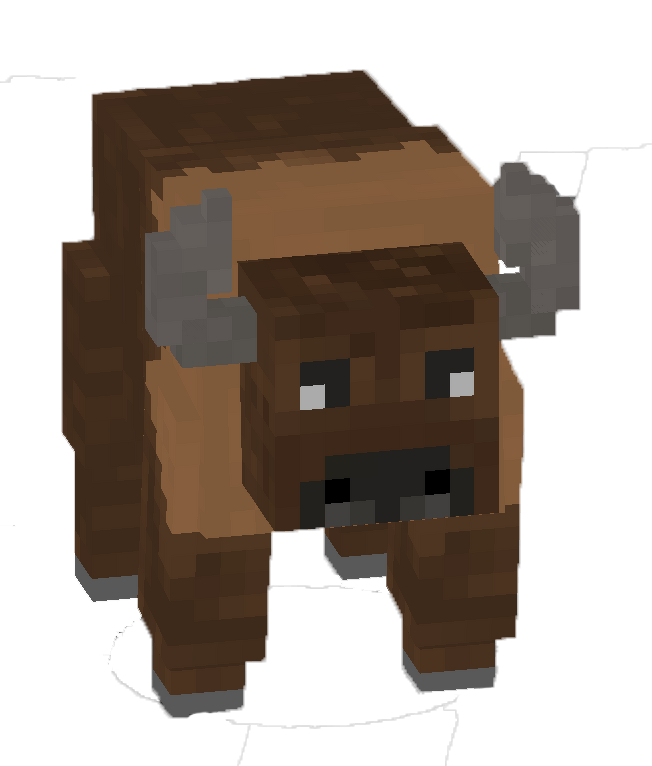 I would like this however. I'd prefer if BlockRenderer added a mob dumping feature but I don't know how easy that would be. -Xbony2 (talk) 20:55, 3 November 2017 (UTC)

Worth mentioning that Better Questing can display a list of all registered entities along with a rotating 3 render in its quest making UI (maybe worth mentioning in that GitHub issue ?). Although until then we can still do it manually, would require a precise step by step tutorial for it though to be sure everything is in about the same style (void world (for uniform blue background) + {NoAI:1} + Mineshot's isometric camera + screenshot + delete background with magic wand or something seems like a real good start for it). Lykrast (talk) 21:04, 3 November 2017 (UTC)

I was thinking having a template that shows a Better Questing page and quests would greatly help pages of quest based modpacks. Each quest on it would have coordinates on its placement and a hover tooltip to show its name, quest requirements and maybe some extra info. Pushing the idea further it could probably be possible to make a script to directly import Better Questing quests from a config (they have coordinates, requirements, name and all, the icons would probably be very problematic though). Lykrast (talk) 15:01, 24 March 2018 (UTC)

I'd personally be okay with simply adding status effects from all the mods to the EFFECT tilesheet. 🐇Retep998🐇🐰Bunny Overlord🐰 08:47, 15 August 2018 (UTC)

There would be just the problem of disabigs, as for example both Astral Sorcery and Defiled Lands add a Bleeding effect. Lykrast (talk) 09:30, 15 August 2018 (UTC)

Because the status effect tiles are 36x36, we can't put them on the normal tilesheeets. Either they'd all go on the EFFECT tilesheet with a bit of manual disambig, or we'd have to have a whole set of new EFFECT abbreviations and tilesheets. 🐇Retep998🐇🐰Bunny Overlord🐰 17:20, 15 August 2018 (UTC)

I support the infobox change. I also agree with Peter on the tilesheets. I'm not quite sure what you mean about the categories. -- SatanicSanta🎅FTB Wiki Admin 21:00, 17 August 2018 (UTC)

There are many items and blocks that were renamed in the 1.14 Village & Pillage update. We need to discuss how we should go about representing and displaying the differences between these renamed items on the wiki. Some things to consider are:

I just used my bot account, ShrimpBot, to standardize Vanilla pages to all end in (Vanilla) for consistency and the fact that many articles link to disambiguation pages of Vanilla items that have alternate articles from mods that have the same name as the Vanilla item. This is obvious for me to see and catch since I have a user script that highlights any disambiguation pages in orange since the extension that does this, Extension:Disambiguator, is not currently approved on Gamepedia. Now that all Vanilla items are formatted the same, it makes sense to have a simple template, Template:V, that simply contains {{ML|{{{1}}}|V}}. It would make it easier to determine which pages reference Vanilla items and simplify the bloat of having to type {{ML and |V}} each time for referencing Vanilla items. This also seems cleaner than doing [[Dirt (Vanilla)|Dirt]] or {{L|Dirt (Vanilla)|Dirt}}, especially if we decide to change the naming convention for disambiguated mod pages. Not sure what the community thinks about "shortcut templates", which I believe this might fall under.

Honestly I'm not a fan of "shortcut templates" like ML that save a few characters but give newer editors more confusion. More to keep track of, and if you know your tricks then it ends making less of a difference anyway (for example, you can just [[Dirt (Vanilla)|]] and it will just fill in the display). Or perhaps I'm just an old dog who doesn't like new tricks. -Xbony2 (talk) 04:46, 29 November 2020 (UTC)

I like "shortcut templates" in certain circumstances because it abstracts the process and allows the process to change. If we use the pipe trick or {{ML}} or something else and then wanted to change the format of Vanilla pages (see Retep's disambiguation proposal) to something more relevant, we would have to update any and all pages that use a hardcoded format. I agree that it can be harder to keep up with, but I think it might help in the long run, especially if this V template becomes used on a wide array of articles, allowing new and veteran editors to pick up on it. Also, the use of a dedicated Vanilla template makes it easy to identify when editing what items are vanilla items with either a page search or skimming an article. Along with the added benefit of being able to tell what pages transclude the V template and the ability to change how it functions at any given time, of course. These are my thoughts on the issue. -- SizableShrimp🦐 (talk · contribs) 05:00, 29 November 2020 (UTC)

I don't think there's a need to put '(Vanilla)' to all pages, most of the one that have the disambiguation page are blocks that can be chiseled, which I plan to remove the disambiguation and include all the chiseled blocks in the page when I have the time - AstroFlux (talk) (contributions) 08:39, 13 December 2020 (UTC)

There's been a lot of discussion and debate about whether or not amboxes (like {{Stub}}) should be above or below hatnotes (mainly {{About}}). This has been discussed for a long time but it seems a consensus was never created. I'm impartial to either, although I will think more about it. I'm making this a vote but if there aren't strong feelings on it, it will be somewhat informal. The results will be appended to the MOS. -Xbony2 (talk) 07:10, 14 December 2020 (UTC)