FTB Infinity Lite 1.10 is a Feed The Beast and CurseForge modpack created by the FTB Team. It is a general, medium-sized "kitchen-sink" modpack. 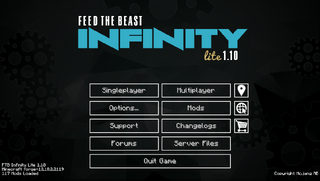 The full, up to date modlist can be found here

FTB Infinity Lite 1.10 has been criticized for its similar name to Infinity 1.7, which is often just referred to as "FTB Infinity".[1]. Although a community vote on the FTB Forums had the majority of voters requesting a change, no change has been taken so far[2]. However, the FTB Team decided to rename their next pack from FTB Infinity 1.10 to FTB Beyond based on the criticism[3].