The Detector Manager is a machine in Steve's Carts that, when placed under an Advanced Detector Rail, can detect a passing cart's modules and their current status, and send out a Redstone signal based on what it detects. 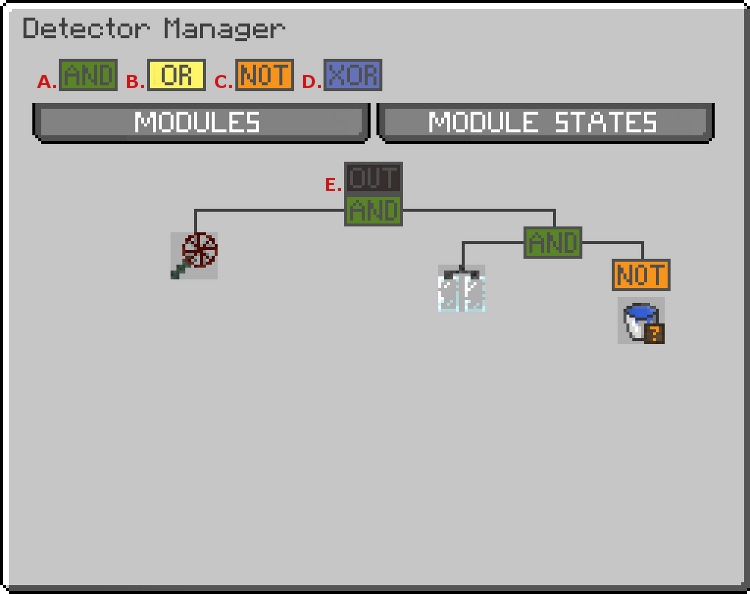 The Detector Manager uses a Boolean logic tree to decide whether or not a passing cart should trigger the Redstone output or not. The first node, or root, of the tree is the dark rectangle marked "OUT." The four Boolean operators, AND, OR, NOT, and XOR can be found at the top of the Manager's GUI. Beneath them are two tabs of conditions, divided into Modules (whether a cart has a particular module) and Module States (whether a particular module meets a certain condition). Hovering over a tab will expand it and allow access to the many conditions available.

Any number of Boolean operators and conditions can be attached under the OUT node: the trigger for the Redstone current can be as simple as "has a Farmer module" or as complex as can be imagined. To attach an operator or condition, simply drag it from above the GUI or its tab, and place it where it should go. The AND, OR, and XOR operators will cause a split in the tree, as each one requires that two conditions be compared. In the GUI example above, the Detector is configured to output a Redstone signal if the following conditions are true of the passing cart:

As seen in the above examples, the control provided by the Detector Manager could be very useful when paired with a Cargo Manager restocking station.