The Demon Ingot is a component added by Extra Utilities 2. It can be used to create the Demonically Gargantuan Drum.

Demon metal is created by throwing Gold Ingots into a lava well. 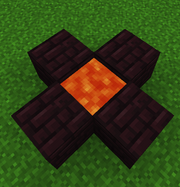 The item's in-game description text chronicles lore about this process, describing a particular room that can generate in Nether Fortresses. The transformation, however, works for artificially constructed lava well as well as naturally-generating ones.

Such a construction (for Extra Utilities 2 version 1.1.3a) is depicted to the right. In version 1.4.0 and later, all 8 blocks[1] surrounding the center lava must be Nether Brick, rather than 4 — a complete square, instead of a plus shape.

Note that this ritual only works on ingots; dropping a Block of Gold will not create a Block of Demon Metal.