The Containment Chalice is able to interact with blocks within a 16 block radius of itself if there is a line of sight without any opaque blocks. It will pull Liquid Starlight from Lightwells in this range, speed up and automatically refill Starlight Infusers in this range, and react with other compatible Chalices in this range. This is through the use of Fluid Sparks, entities that carry varying amounts of fluid from the Chalice they came from. When two Chalices react, the Fluid Sparks created fly towards each other and drop a block item depending on the source fluids. If either of the Fluid Sparks is killed before this occurs, then the other will disappear and no reaction will take place. Applying a redstone signal to the Chalice will prevent any interactions from taking place. The interaction radius can be edited in the mod's configuration file. 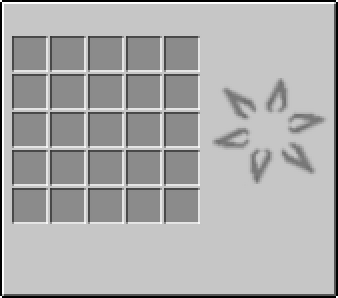 “
”
While the Lightwell is functional, the small size of its basin can be problematic, especially considering how much Liquid Starlight the Infuser works through. Some method of compressing stored liquids is needed.

Owing to the nature of the celestial energies, an elegant method to contain and move Liquid Starlight and other liquids is needed. An idea to accomplish this that is inspired by the smaller shrines of the Ancients, may just work.

As Liquid Starlight is highly energetic under compression, Resonating Gems were required to keep everything in check. Unfortunately, this also means that relocating a Chalice without first removing the stored fluid will result in the fluid being dispersed into the ether.

Fortunately, the Chalice is able to draw Liquid Starlight from nearby Lightwells across the ethereal, though only the bottom seems safe to manually manipulate the contents of a Chalice.

The containment does not prevent the fluid from seeking escape, and ethereal tendrils of the fluid's essence will continually explore near the Chalice. These essence tendrils may improve the Infuser's absorptive performance.

The essences of other fluids contained nearby seem far more ready to interact, much like the Infuser. Fluid interactions will generate from nearby Chalices containing appropriate liquids, with slower loss than would be expected from the raw liquids themselves.

Adding more Resonating Gems to counteract the escaping essence destabilizes the entire Chalice, rendering it useless. A slight power boost in the form of a redstone signal to a containing Chalice suffices to prevent essence escape, however.
— Astral Tome