This page is about the Cockatrice added by The Aether. For other uses, see Cockatrice. 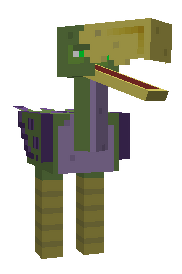 Cockatrices are a mob in the Aether expansion mod. They resemble colorful Moas, and are highly dangerous due to the poisonous darts they fire from their mouths. They are capable of gliding.

Cockatrices lay chicken eggs and drop up to 3 feathers upon death. The eggs are due to the mythology based on cockatrices, which are said to hatch from a chicken egg that is incubated by a snake under the full moon. Considering that chickens have the same exact drops as the dangerous cockatrices, and an additional raw chicken, it is recommended to instead farm those.

Cockatrices will walk around a bit until they see the player, at which point they will aggressively fire poison darts. Cockatrice's will glow in the dark, on wings body tail and head at night.

The darts a cockatrice fires do minimal damage, but the real danger is the poison, which does a steady one damage every two seconds and causes the player to lose some control over their movement by giving them nausea, which can send them plummeting off of a cliff. Because of this, it is recommended to use ranged weapons or consume a bucket of remedy before engaging them in combat. It is also a bad idea to battle them near a cliff or island edge unless you have taken remedy beforehand.