Cluckington is a neutral creature added by BetterStorage. It has 30 health points, and, if provoked, will deal 2 points of melee damage. It drops the same items on death as a normal chicken.

He is spawned in the world when the player uses a name tag with the display name Cluckington on an adult chicken. When used, a small explosion will occur, and the adult chicken will disappear, and Cluckington will spawn.

It is considered a homage to the popular Twitch.TV streamer and Former FTB Modpack Developer, Wyld. In his Minecraft streams was a character, Cluckington, who could be considered one of the faces of the channel, as an angry chicken. Cluckington was used in his away-screen, and was frequently used in jokes by the streamer as well as his watchers. The developer of BetterStorage, copygirl, was, at one point, a daily watcher of Wyld's stream, and was even a moderator of the chat.

Cluckington can be bred with Wyld's player heads. 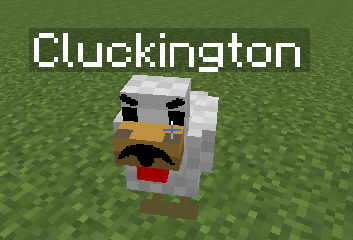