The Witchery mod adds new a large variety of structures to villages and expands the number of biomes they can be found in with new village types to match the biomes. It also adds two new villager types, Guards and Apothecaries. Villagers will also go to sleep in cots at night, to allow for Vampires to suck their blood easily.

Witchery also adds the ability to become the mayor of the village with a high reputation. Becoming the mayor of a village allows the player to assign existing villagers to be additional Guards. This can be performed by giving the villager a Leather Tunic. When a village is a successful trader, or has many of its trades unlocked by the mayor, they will be less likely to become a Guard. Village Guards can not be unassigned. 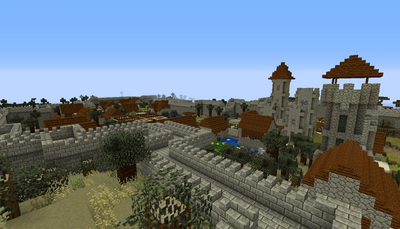 In vanilla Minecraft, the biome a village is in determines what blocks the structures will be made of: Oak wood and cobblestone for plains and savannahs, and sandstone in deserts . The Witchery mod expands on that, adding villages made of snow and ice, spruce wood, birch wood, and jungle wood.