The Cart Assembler is a machine in Steve's Carts where custom minecarts are configured and built using various Modules. 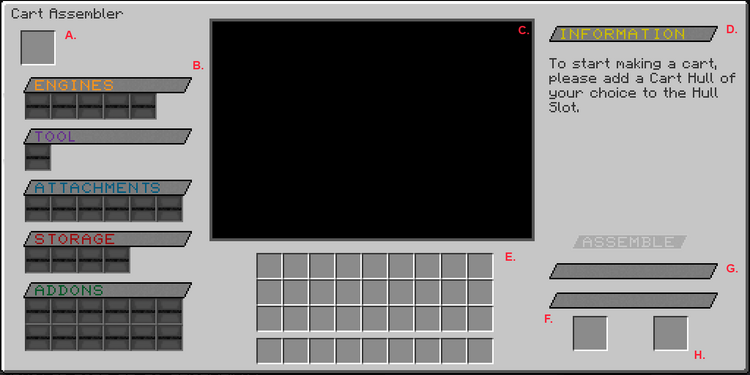 Cart creation begins first with a chosen hull, which is placed in slot A. There are two major components of a hull:

Engines power the cart and its modules, enabling the cart to move on its own and perform the functions of its modules. There are currently two types of engines: coal and solar. A cart may have, at most, three engine modules. During operation, the cart determines which engine to use at a given time according to the Engine Priority.

Tools are used for harvesting resources. Only one tool can be added per cart.

Attachments provide additional abilities the cart can perform, such as laying rail, fertilizing crops, or attacking mobs and players.

Storage modules function as the cart's inventory when collecting items. With the exception of internal storage, the side that the chests occupy can prevent certain attachments and addons from being built in.

Addons are modules that can be added to a cart that perform minor tasks, or work in conjunction with other modules. These include things like melting Snow and Ice for a farm, detecting targets to attack, and controlling the height of a constructed rail line.

Once the hull and components are chosen, place any consumable fuel such as coal or wood into slot F, in order to fill the Fuel bar. Press the 'Assemble' button and the fuel consumption bar will begin to drain as the cart is being built. The progress bar labeled G shows the real-time remaining to build the cart.

The completed cart will be placed in slot H.