A nuclear reactor is a multiblock structure that is used to generate power for the IndustrialCraft 2 mod. Nuclear reactors can be a small as a single block and scale up to a 5x5x5 structure for Fluid Reactors.

The Static Boots can be worn in lieu of the rubber boots in the Hazmat set.

The Quantum Suit can also prevent radiation damage, but it is a very expensive late-game item with a variety of features beyond radiation protection.

For both of these armor sets, the full set MUST be worn in order to negate radiation effects. These sets can also be mixed and matched to negate radiation damage. For example, a player can wear the Scuba Helmet, QuantumSuit Bodyarmor, Hazmat Suit Leggings, and Static Boots, and will be protected from radiation.

A nuclear reactor is constructed by placing a Nuclear Reactor block, and optionally surrounding it with up to 6 Reactor Chambers. Right-click on the reactor to access its internal inventory, which will be a grid that is 3x6 (for a single reactor block) to 9x6 (for a full 6 reactor chamber build). Place Fuel Rods in the grid along with other reactor components. Applying a redstone signal to any part of the nuclear reactor will turn it on, and the Fuel Rods will start to generate heat and Energy Units (EU). Generated EU is not stored; if there is no cable or EU storage device with free capacity attached to the reactor the generated EU will be lost. 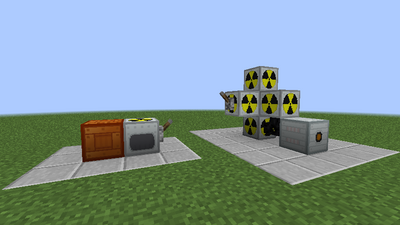 Uranium Fuel Rods are crafted in a Fluid/Solid Canning Machine and can be crafted into Dual Fuel Rod (Uranium) or Quad Fuel Rod (Uranium). Fuel Rods have a durability value proportional to their lifespan in seconds. Uranium Fuel Rods have a starting damage value of 20,000. A single fuel rod in a reactor will generate 5EU/t and 4 Heat Units per second (HU/s) and consequently produce 2,000,000 EU over its 20,000 second working life. Fuel Rods multiply both their EU output AND their Heat output as a result of being adjacent to other fuel rods or sources of neutrons such as Neutron Reflectors. The EU efficiency of a Fuel Rod starts at 1, and increases by 1 for each adjacent neutron source, and the Heat Output is computed as

is the number of adjacent rods.

In an operating nuclear reactor Fuel Rods will try to dump all their generated heat into adjacent components first if those components accept heat (i.e. must have a durability). If there are no suitable adjacent components, the heat is instead diverted into the reactors hull. The reactors hull has a default heat capacity of 10,000—exceeding this will cause the reactor to explode with devastating consequences. A typical explosion will destroy most blocks around the reactor within a 32-block radius in all directions. Additionally, at Hull temperatures starting at 40% of the max heat capacity, the reactor will start to set fire to blocks around itself, damage entities and so on. At 85% blocks in a 7x7x7 area around the reactor will start turning into Lava. A full Hazmat Suit should be equipped when near a hot reactor to mitigate character damaging effects.

Therefore, it is important to vent excess heat from the reactor, which can be done with reactor components. Components can vent heat into the air around the reactor, transfer heat from the hull into themselves, and exchange heat with their neighbors. If, for any reason, more heat is transferred into a component that transferred out, this is represented as damage to the component; damaged components will self-repair if given the opportunity to transfer more heat out than in, such as if an overheating reactor is turned off. (This is the basis of unstable reactors, which are run with a pulsed on-off cycle).

This is a simple, tileable, design for a reactor that emits exactly 60 EU/t. The heat generated is 96 HU/s, which is shared equally among the 4 Overclocked Heat Vents, giving them 24 HU/s each. These heat vents can self cool up to 20 HU/s leaving an excess of 4 HU/s. Two Component Heat Vents deal with this excess as they happen to be able to vent 4 HU/s from each adjacent component. 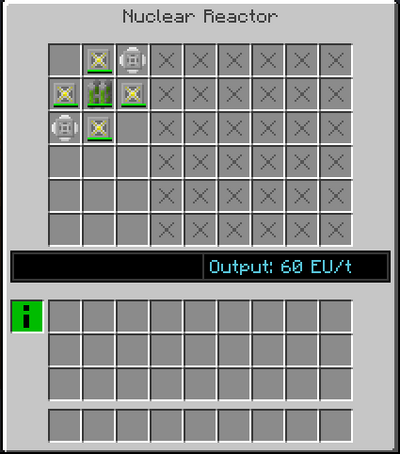 MOX reactors are nuclear reactors that are fueled with Fuel Rod (MOX), Dual Fuel Rod (MOX), or Quad Fuel Rod (MOX). These fuel rods only have a durability value of 10,000 and last half as long as Uranium-based Fuel Rods. However, they gain bonus efficiency from the Reactor's Hull heat. The bonus scales from 1x (none) at 0% Heat linearly to 5x at 100% Heat.

Simple MOX reactors can be made by pre-heating an empty reactor with one Quad Fuel Rod (Uranium) and no cooling. A single quad fuel rod generates 96 HU/s, which means it will take 78 seconds to add 7500 Hull Heat to the reactor, which gives a bonus efficiency of x4 to EU production. Then, fill the reactor with a stable design that includes no components that cool the Hull.

The following components are typically used for cooling in reactors that maintain a stable Hull Heat level.

This reactor has been pre-heated to 75.84%, and is built around a single Quad Fuel Rod (MOX), using only components that are safe to use in MOX reactors. 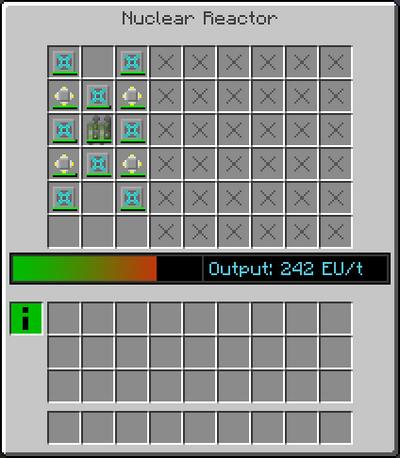 Fluid reactors are a 5x5x5 multiblock structure. They do not produce Energy Units but rather the Heat - that was such an annoyance in the normal reactor, is now the output. Additionally, the heat output of Fuel Rods is doubled. Other than the increased heat output the reactor largely works the same way with regards to heat: Fuel rods emit heat into adjacent components or the hull of the reactor, and cooling components pickup heat from the hull, exchange it with surrounding components and/or vent the heat. Vented heat is what is used to produce IC2 Hot Coolant from IC2 Coolant.

NB. The increased heat output is not visible to reactor components such as heat vents and exchangers. They continue to operate as though the heat output was at its regular levels, but the amount of heat actually vented and/or stored in the hull is doubled.

A fluid reactor consists of a 5x5x5 shell of Reactor Pressure Vessel blocks around a fully formed 3x3x3 reactor. In addition, the outer shell must have at least one Reactor Access Hatch to access the GUI of the reactor and to pipe items in or out, one Reactor Redstone Port which must be given a redstone signal to activate the reactor, and one or more Reactor Fluid Port to pipe IC2 Hot Coolant out and cooled IC2 Coolant back in. 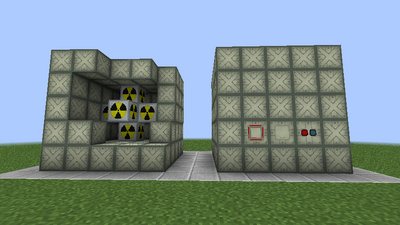 A supply of IC2 coolant is crucial to the operation of a fluid reactor. As reactor vents now heat coolant, if the supply of coolant runs out the vents instead vent their heat back into the hull of the reactor where it can build up and ultimately lead to catastrophic failure. 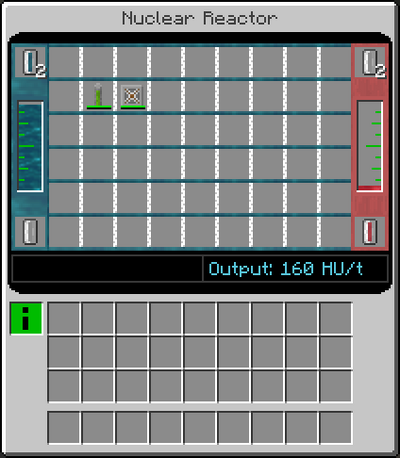 Bug: The version of IC2 used to produce this screenshot has 2 display bugs related to the output value: The display value is a factor of 20 too large (in this case 8 is the actual value) and the units should be HU/s.

The Liquid Heat Exchanger is an IC2 Heat source that accepts Hot Coolant and produces cooled Coolant and Heat Units (HU) that can be used on heat powered devices like the Stirling Kinetic Generator, Fermenter, Blast Furnace, Stirling Generator and Steam Boiler. To produce Heat (And cooled IC2 Coolant) it must be stocked with 1 to 10 Conductors each of which allows 10HU/s up to a max of 100HU/s. Ensure your design has a Liquid Heat Exchanger per 100 HU/s generated.

When coupled to a Stirling Generator 100 HU/s generates 1,000 EU (Delivered as 50 EU/t). e.g. A single Quad Fuel Rod in a regular reactor produces 60EU/t and 96 HU/s. In a fluid reactor, it will generate 192 HU/s which will require 2 Liquid Heat Exchangers that will produce 96 EU/t in coupled Stirling Generators.

e.g. A single Quad Fuel Rod in a fluid reactor produces 192 HU/s. Adding regular Water or Distilled Water into a single Steam Boiler configured to output a pressure of at least 221 kPa will produce Superheated Steam, generating 96 EU/t in the first Steam Turbine and an additional 48 EU/t in the second for a total output of 144 EU/t. This is more than double the output of the same Fuel Rod in a regular reactor (60 EU/t). 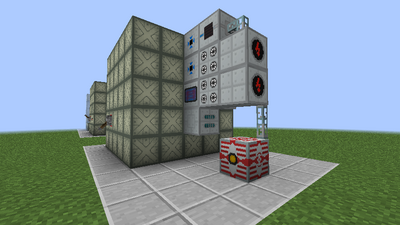 MOX Fuel in a fluid reactor

In a standard nuclear reactor MOX fuel rods boost their EU output, but not heat output, in response to reactor hull heat. In fluid reactors the EU output is ignored, and getting MOX fuel rods to scale their output heat with the reactors heat would make for a dangerously unstable setup. However, MOX fuel rods will double their heat output if the reactor is heated above 50%.

As an example, a single Quad Fuel Rod (MOX) in a Fluid reactor heated to 75% would be generating 432 HU/s. This will create sufficient Superheated Steam to generate 288 EU/t.