The Buffer Cell is a redstone circuit added by Project Red. It functions as a bridge for two crossing redstone lines (such the Null Cell) but with an positive interaction between A- and B-line (see Usage).

If the mod MineChem is installed, then you can decompose the Buffer Cell with the Chemical Decomposer into specific chemical compounds of MineChem. 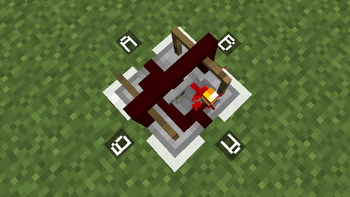 For an easier usage, NEI and WAILA could be installed, which show the input, output and lock on the Buffer Cell.

The Buffer Cell has two A- and two B-sides for red alloy cables, redstone, an adjacent circuit, machine, lamp or anything that can be controlled with redstone signals.

Redstone signals are transmitted between the A-sides and B-sides, but if the the A-line is "on", then the gate switch "on" the B-line, even no signal receives one of the B-sides ("A = on" result in "B = on"). This function does NOT expire vice versa ("B = on" doesn't result in "A = on").

If the A-line is "off", then the gate switch "off" the B-line, but a redstone signal/pulse can transmitted on the B-line.