Aura is a mechanic added by Thaumcraft 5. Aura is a magical energy that exists in the world. There is Aura for each Aspect, although it's mostly just the Primal Aspects.

Aura concentrates into an Aura Node, which pure Vis can be extracted from. Aura Nodes can only be seen while wearing Goggles of Revealing. Aura Nodes will replenish the Aura.

Normal Nodes have no special properties. 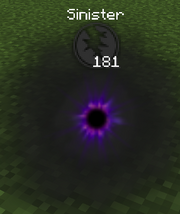 Sinister Nodes have increased sensitivity to darkness; more darkness will make them replenish quicker. These Nodes will convert the area around them into an Eerie biome.

Hungry Nodes drain the Aura instead of replenishing it.

Pure Nodes will drain Flux at the price of becoming smaller. They can be spawned in a Silverwood Tree. 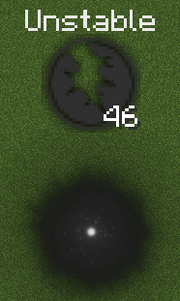 A Perdito Unstable Node. Note the black color is from the Perdito, not from the Node's instability.

Unstable Nodes have a 1/33 chance to provide other Aspects on a period event.

Nearby Aura Nodes move towards each other and merge. The merged Aura Node has a combined Vis, and usually takes on the Aspect of the larger Aura Node, or a combination of the two.