The Aura is a magical the source of the magical energy used in Thaumcraft 3. It concentrates in form of Nodes which contain Vis. There are multiple types of nodes.

Aura Nodes are concentrated clusters of vis that randomly spawn in the World. Each node is unique in size and amount of vis. They are only visible if the player is wearing Goggles of Revealing.

Currently there are four types of Nodes: Normal, Pure, Unstable and Dark. Each has its own properties.

A normal node in the wild

This is the most common node. It has no special properties. 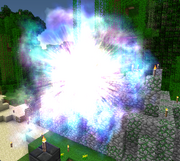 A pure node. Note the sunburst in the center.

This type of node has a very low chance of naturally spawning, but can be grown from Silverwood Trees. It removes small amounts of vis without having to spawn wisps, although that will happen if there is too much flux on the node. They cleanse themselves out of all flux. They can be easily identified by the sunburst in their center. 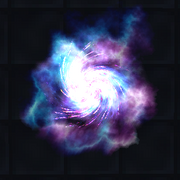 An unstable node. Note the shimmering spiral in the center.

This type of node has a very low chance of naturally spawning, and are the opposite of pure nodes, considering that they will generate flux in the form of mutatio. They can be identified by the shimmering spiral in their center. 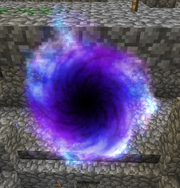 A dark node within a Barrow Hill.

This kind of node has a very low chance of naturally spawning, but always spawn within Barrow Hills. They generate Malum, Mutatio and Mortuus aspects in the form of flux, what causes the spawn of wisps of these kinds. They can be identified be the black vortex in their center.

Each node has a random amount of vis, and when this vis is drained it will request more from nearby nodes, which will send it in the form of small stars, at the cost of generating small amounts of flux.

A node can discharge itself from flux by using it to create various magical events, such as spawning wisps and causing thunderstorms.

A node supplies the Aura out to a limited range. The range of any node is equal to one-quarter of the maximum Vis it can hold:

This can generate areas in the world where no thaumaturgy can be practiced. The best solution is to move to another area. Another important aspect of this mechanic is that the Goggles of Revealing will always show information of the closest node, not the one in range. This can lead to problems if the Player is not careful, considering that the vis and flux levels shown will not be from the node the player is working with.

Nodes that are very close will move towards each other until they come into contact, then they will fuse together creating a new node. They do this when the distance squared is less than the average of the current aura levels in the two nodes. The new node will be of the same type as the parent node with the highest current level of vis at the time of the merge and will have a max capacity equal to the base max of the node with the higher current vis plus 1/3 of the max vis of the node with the lower current vis.