This page is about Aura from Aura Cascade. For other uses, see Aura.

Aura is a form of energy added by the Aura Cascade. It is a magical fluid that can transferred with Aura Nodes.

Aura is not created or destroyed, similar to real energy.

From the Encyclopedia Aura:

“
”
Aura is a magical fluid, which comes from craftable Aura Crystals. You can craft different Aura Nodes, and place them in the world. Aura nodes will connect to nearby nodes in a straight line, and transfer energy. Aura is not created or destroyed under most circumstances. Instead, Aura represents one part of the overall machine. Aura is used to transport and store Power, in mechanics which will be discussed later.

“
”
Every second, Aura Nodes will send a percentage of their Aura to connected nodes. This percentage depends on the distance between the nodes and other connected nodes. When two nodes are connected, both send aura to each other. This means that the quantity of aura in connected nodes tends toward equilibrium, under normal circumstances.

Aura Crystals can place Aura in a node

Aura Nodes both transport and store Aura. If another Aura Node is nearby, the first Aura Node will share and balance its energy with the other one, creating a network. The player can determine the amount of aura a node has by hovering their cursor over it, which will display a small window that shows the values, as shown below. 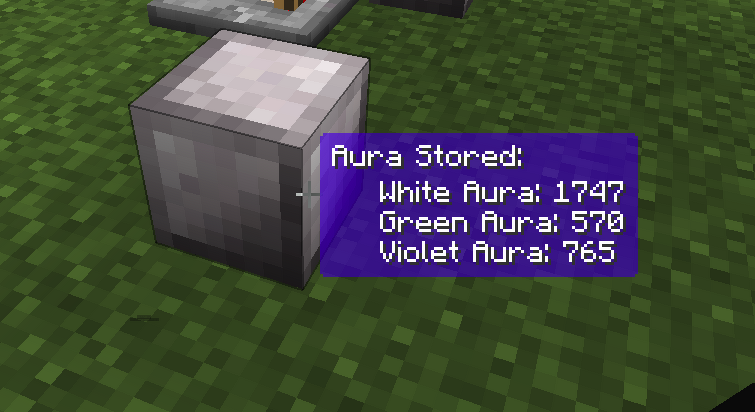 Aura naturally moves down due to gravity; if an Aura Node is under another Aura Node, all the Aura in the network will move to the lower node.

Aura is used to make Power. Power is created when Aura is pushed upwards, using a pump. Pumps require a source of fuel, depending on the type of pump.

When power is created, it is distributed to local Consumers. These consumers use power to do something. For example, the most basic consumer is the Cascading Processor ; it uses power to smelt items into their results.