This page is about the Aether II: Highlands mod. For other uses, see Aether.

Aether II: Highlands is a mod by Gilded Games, as a re-continuation of the original Aether mod. Aether II adds a new dimension called the Aether, a dimension serving as the polar opposite of The Nether. The Aether is made of floating islands, similar to The End, and contains plenty of biomes, dungeons, and loot.

The Aether can be entered by created a structure similar to the Nether Portal, but out of Quartz Blocks instead of Obsidian. The portal should be "lit" with a Water Bucket instead of a Flint and Steel.

As noted above, the Aether can be exited through the Aether Portal. However, there is also another way to exit - by jumping off the floating islands and into the clouds below. Instead of falling into a void and dying like in The End, the player will fall back into the Overworld. This does, however, cause significant fall damage, but this can be avoided with a Parachute such as the Cold Cloud Parachute or by falling into water.

Falling out of the Aether does not work in reverse and building high up will do nothing; a portal must be used for access. 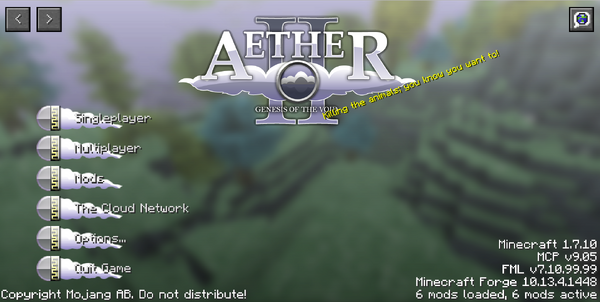 The Aether II, per default, modifies the Minecraft menu. It can be restored the original menu by clicking the arrow buttons at the top-left of the screen.

Clicking "The Cloud Network" allows access to the Aether II's official servers (called "Clouds"). They may or not be online, depending on many various factors.

Aether II modifies the normal Minecraft inventory. A tab is added at the top, to switch between between "Backpack" and "Accessories" mode. The Backpack mode is the same as the usual inventory, while the Accessories mode allows access to special trinket slots- 1 Pendant, 1 Companion, 1 Shield, 2 Rings, 1 pair of Gloves and 2 Miscellaneous slots.