The Advanced Control System is an Attachment Module that allows the player to directly control minecarts in Steve's Carts. 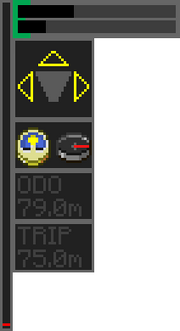 When mounted on a cart by the Cart Assembler, this attachment allows the player to directly control the minecart. In order to use this module, the player must have somewhere to sit inside the cart, so a Seat needs to be attached. The Advanced Control System's GUI shows two buttons: the one on the left resets the Trip Distance meter, and the one on the right is the Seat module's mount/dismount button. In addition to the cart GUI, the Advanced Control System also has a HUD (Heads Up Display) that shows in the upper left corner of the screen when the player rides in the cart and displays several relevant pieces of information regarding the trip.

The bars at the top show the current status of the Engine modules. Each Engine will have its own set of two bars; the colored section shows that Engine's priority level, while the black bars show the current fuel levels for that Engine. The top bar is a finely tuned measurement, while the bottom is a roughly tuned measurement; each time the top bar fills or empties, it adds or subtracts a notch on the lower bar.

The three yellow arrows below the Engine status bars indicate the current direction the cart is being steered in. While traveling, holding one of the matching movement keys (default: W,A,D) will steer the cart in that direction when it arrives at a Junction Rail Track. As the button is held, the arrow will change from a yellow highlighted arrow to a yellow filled arrow. The cart may also be reversed by pressing the back movement key (default: S).

Below the directional indicators are several informational displays. The Clock and Compass function exactly like their item versions, displaying the in-game time of day and direction towards spawn, respectively. The Odometer shows the total distance the cart has traveled since it was last placed on the track, and the "Tripometer" shows the distance traveled since the Reset button in the cart's GUI was last pressed.