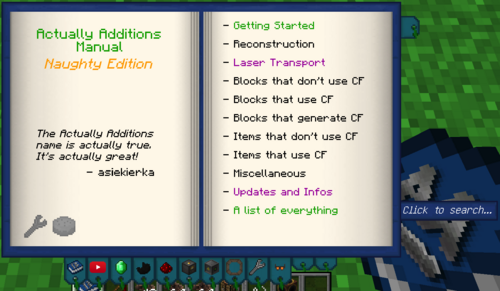 The "Naughty Edition" of the Actually Additions Manual, given specially to Xbony2.

The first time the Actually Additions Manual is opened, a message and button will appear, allowing for the automatic addition of bookmarks recommended by the mod author. Once that message is cleared, it will be replaced by a random quote about the mod and links to the in-game config and achievements page. The main page of the Actually Additions Manual will also include the edition of the manual; this is usually rendered as "Edition " plus the version number, such as "Edition 57", although some manuals have special editions for certain users. The bottom of the GUI includes twelve bookmarks that can be used to mark pages. There is one bookmark on the right side of the manual that links to the Trials section. The Actually Additions Manual's sections are organized into a table of contents based on blocks, items, Crystal Flux (CF) usage or lack of usage, and other miscellaneous sections, although there is a section for all pages and a search bar.

The Actually Additions Manual has a section for "Trials"— a set of challenges for players to complete if they desire. Trials are not automatically checked; when completed, the player must mark the Trial as complete in the book manually.